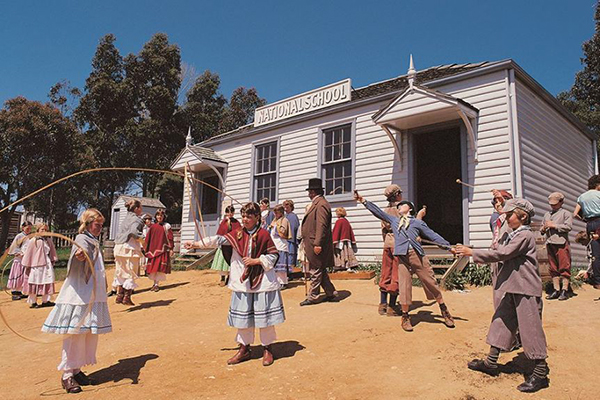 Marion Littlejohn says she does not belong at Sovereign Hill, the living museum 100 kilometres northwest of Melbourne.

But every week the retired school teacher is one of hundreds of volunteers who leave behind their watches and phones and dress in carefully crafted costumes to bring the Victorian goldfields to life.

“I don’t fit because the gold rush was a young experience. The average age in Ballarat in the 1850s was 22,” Ms Littlejohn said. 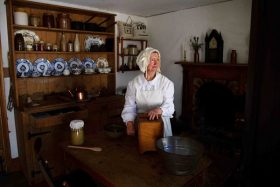 Marion Littlejohn making scones in a cottage at Sovereign Hill where she volunteers each week.(ABC Ballarat: Rhiannon Stevens).

Sprawled across 15 hectares and populated with shops, pubs, a school, cottages, gold diggings and workshops, Sovereign Hill tells a story of the wild and vibrant decade in Ballarat after the discovery of gold in 1851.

Before coronavirus, more than half a million people visited the site annually, which makes it difficult to find a Victorian child who has not experienced the seductive power of boiled lollies, gold panning and time travel.

Ms Littlejohn remembers the time a child told her: “It’s much better living in Bendigo, we have electricity, you people in Ballarat are very unlucky.”

Could Sovereign Hill have electricity?

Opened in 1970, Sovereign Hill grew from the desire of a group of locals to preserve gold rush history and re-energise Ballarat with a tourist attraction.

One of the founders, Bill McGregor, said there was a big vision behind those humble beginnings.

“We wanted to do more than just create buildings and machinery. We wanted to get the atmosphere of the goldfields,” he said.

At the time, interest in settler Australian history was booming and open-air museums and historic parks like Old Sydney Town, Old Gippstown, and Coal Creek were opening around the country.

But while others have floundered or closed, Sovereign Hill is celebrating its 50th birthday with an expansion and has launched a 20-year master plan. 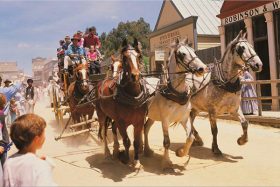 Sovereign Hill, which opened on November 29, 1970, is a hands-on, if sanitised, museum experience. (Supplied: Sovereign Hill).

Mr McGregor believes its proximity to Melbourne and the passion for historical accuracy of its founders set it apart.

When a book on Sovereign Hill’s history was published, Mr McGregor said an alternate title could have been A Seven-Year War “because there were lots of fights”.

“There were some who wanted the New York Bakery to not have electricity connected, and to have ice as they had in the old days,” he said.

“And that was seriously ridiculous, because most of the visitors come in summer, and we needed a lot of food and we had to keep it refrigerated.”

In the 1990s Sovereign Hill expanded to include a hotel and an evening sound and light show about the Eureka rebellion called Blood on the Southern Cross.

The museum also began to court the Chinese tourist market. According to ex-CEO Peter Hiscock this was rare at a time when most Australian tourist attractions looked to the Japanese market.

Before coronavirus, international tourists accounted for about 15 percent of Sovereign Hill’s visitors. 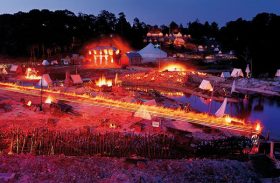 The expansion in the 1990s secured the museum’s economic future and according to Mr Hiscock it enabled Sovereign Hill to depict the most important and dramatic moment in Ballarat’s gold rush history.

“Eureka always taunted us,” he said.

“Eureka [rebellion] happened right in the middle of the time period, and every time we tried to do a re-enactment of it, it became a pantomime.”

The true history of the mud, human effluent, horse manure and piles of offal from thousands of sheep slaughtered on the goldfields are missing.

“Some things you do have to compromise on,” Mr Hiscock said.

“You can’t depict the dirtiness of life.” 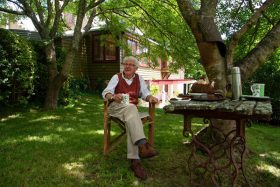 In this sanitised version of the past, the Wadawurrung people were also missing, and it is Sovereign Hill’s depiction of Aboriginal history that has been heavily criticised in the past and has evolved most during the last 50 years.

The discovery of gold had a major impact on the Wadawurrung people, it came after the frontier wars but before Aboriginal people were forced onto reserves and missions under the Aboriginal Protection Act.

Today, Wadawurrung perspectives of the gold rush and how Aboriginal people survived it is taught during school visits and via a virtual tour of the outdoor museum called Hidden Histories, which visitors can access on their phones.

Sovereign Hill is aiming to grow its annual visitation to 1.4 million in the next 20 years — no small ambition for a not-for-profit community-based organisation.

“The sort of place that Australia is and what Australians are has been determined by the experiences of the first settlers and the settlers who came to the gold rush,” Mr McGregor said.

But its impact on present-day Ballarat, where it brings jobs and millions of dollars in economic activity, is what he feels most proud of.

“To me, that’s the great satisfaction that I’ve had from being one of the founders,” Mr McGregor said.