You are here: Home » Articles filed under: 'News' » Article: 'Should a museum be allowed to cash-in'

Should a museum be allowed to cash-in 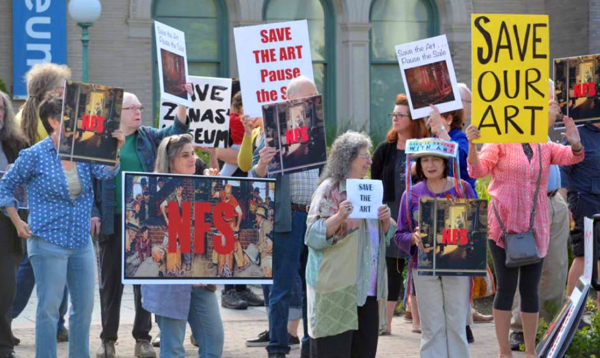 About 40 people protested the selling of artwork by the Berkshire Museum to fund their expansion and create an endowment, in front of the museum on Saturday, August 12, 2017. Photo: © Gillian Jones/ Berkshire Eagle.

Adrian Ellis, Should a Museum Be Allowed to Cash In on Its Art? Yes, But on Two Conditions, ArtNet, 18 January 2018

The museum industry has a deaccessioning problem. Adrian Ellis believes this policy can solve it.

The story is by now depressingly familiar: A small museum—often part of a university—falls on hard times—or, at least, believes that it has. It identifies a selection of works from the collection and puts them up for sale. Local residents and former staff members express outrage. Professional organizations condemn the decision and threaten to withdraw the institution’s professional accreditation. The museum’s relationship with its community and reputation are tarnished, but it survives. Another museum in dire straits has the same idea, and the cycle begins again.

In 2004, during one of the periodic flare-ups of this issue, I suggested an alternative. It got some traction with commentators like the redoubtable Donn Zaretsky in his Art Law Blog and continues to enjoy periodic academic references. I briefly became the eponym behind the Ellis Rule, which states that:

A museum selling a work should ensure that the institution or individual to which or whom the work is sold commit in some binding form to equal or higher conservational standards and equal or higher public access to the work in question. Subject to that condition being met, the museum should be able to exercise appropriate discretion with respect to how it spends or invests the proceeds of the sale, and specifically, should not be required to use it solely for the acquisition or conservation of art.

How the System Works Now—and Why It’s Broken

Currently, all leading museum industry bodies—including the American Alliance of Museums (AAM), the Association of Art Museum Directors (AAMD), the International Council of Museums (ICOM), the American Association for State and Local History (AASLH)—vigorously oppose the sale of works of art unless the proceeds are used to buy more art or, in some cases, to preserve the collection. If a museum plans to use the funds for anything else—from the publication of catalogues to free admission to the construction of a new wing—the outrage begins.

The reasoning behind the existing code of conduct is simple and sensible: The treatment of works of art as fungible items represents a moral hazard that might incentivize institutions to solve financial problems through art sales. This would discourage potential donors and generally abrogate the board and management’s core responsibilities for stewardship of their collections.

Professional organizations, however, have few sanctions beyond condemnation—and the occasional appeal to authorities such as state attorneys general, who, as we have seen in cases such as Berkshire Museum controversy, do have some restraining power on institutions in their jurisdiction.

Even without outside legal intervention, the threat of ostracism can be an effective restraint in the tightly knit museum community. But it is less effective with, for example, universities that are contemplating sales, as their leaders regard themselves less as part of the museum community and more as part of the educational community, which does not see the integrity of its art collections as fundamental to its mission.

In recent years, a number of universities and institutions have, for various reasons, decided to risk the ire of AAMD and the AAM: New York’s National Academy of Design, Lynchburg’s Randolph College, the Delaware Art Museum, the Berkshire Museum, and, most recently, LaSalle University.

This is partly because of a lack of any real sanctions, but primarily because the current code of conduct, though it has honorable intentions, fails to acknowledge the reality that a museum that perceives itself as on the edge of oblivion—whether through circumstances beyond its own control or through mismanagement—will consider extreme measures if they represent an alternative to its demise. And an institution like a university, for which the integrity of its art collection is not central to its mission, will not see a ding in that integrity as a cardinal sin.

Deaccessioning sagas will therefore continue and, as the lack of sanctions becomes increasingly apparent, the disincentive to sell works will probably weaken, a bit like the use of profanity in public life we are currently witnessing.

That is why I believe the Ellis Rule represents a sensible solution.

The rule should not, in my view, constitute the only condition to be met by a museum considering deaccession.  The cautionary prescriptions of AAMD—that a museum should only consider deaccessioning an object if it lies outside its mission, is in poor condition, is a duplicate, etc.—are all robust and well-considered. But in permitting funds from deaccessioning to be spent on things other than the purchase or conservation of art—and, at the same time, ensuring greater protection and access to the work itself—any and all trades create a net improvement.

In order to work, of course, these exchanges would need to be regulated. If the buyer does not commit to meet the conditions for preservation and access in precise and explicit terms that can be policed by the AAMD or another recognized body, then the museum’s decision to dispose of the work should be censured, regardless of what happens to the proceeds. (Currently, it is the use of the proceeds that determines the punishment, not the fate of the art.)

This new standard would clearly require that works be bought and sold in a regulated and supervised context, which would crimp the prices that could be obtained. But we are used to imposing such conditions on sales of assets such as land and on intellectual property. And it ensures that the works remain protected and accessible.

This approach also acknowledges the reality that the financial circumstances in which works are held will change over long stretches of time and that institutions will inevitably enjoy good health and bad, and the consequences of this have to be acknowledged. The stewardship of art and material culture is a collective social responsibility and need not be tied as closely to the fate of an individual museum as in the case of the current framework.

There are signs that there may be increased openness to reconsidering the previously rigid codes surrounding deaccessioning. In a recent interview with Charlotte Burns, the director of New York’s Museum of Modern Art, Glenn Lowry, argued that deaccessioning proceeds ought to be able to shore up endowments to support programming. Although he rejected the notion that funds from the sale of art could also be used to fund operating costs, his statements amount to a significant straw in the wind.

I am trundling the Ellis Rule out for a spin again because the current framework seems on a weakening trajectory and if the current line cannot be held, it is in the best interests of the sector to draw a new one.

Adrian Ellis is the founder of AEA Consulting.