You are here: Home » Articles filed under: 'News' » Article: 'Should museums mount exhibns with moral agenda?'

October 29th, 2021 | Browse other: News. | Tagged with: ArtEquity, Should museums mount exhibitions with a moral agenda? | 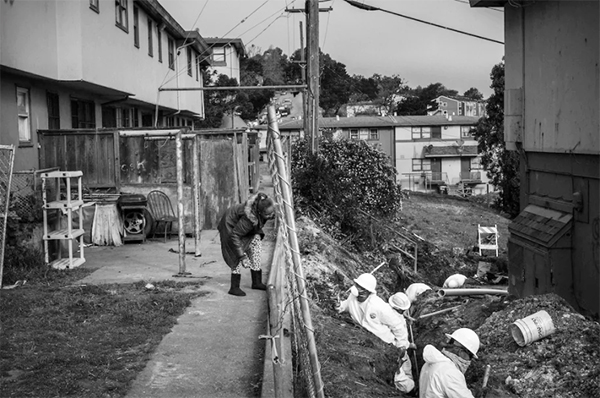 A resident talks to workers in the Hunters Point neighbourhood of San Francisco in 2017. Hunters Point Naval Shipyard is a superfund site. (Harvard Art Museums, Fund for the Acquisition of Photographs/© Ashley Gilbertson).

Sebastian Smee, Should museums mount exhibitions with a moral agenda? Absolutely. If they do it well, The Washington Post, 26 October 2021

CAMBRIDGE, Mass. — Last year, while working on a story about the various crises facing America’s art museums, I spoke with two people, Carmen Morgan and Michael Robertson, who work at an organization called ArtEquity. ArtEquity works with the Art Institute of Chicago and other arts organizations to address issues around equity, inclusion and justice. In the course of our conversation I asked what sorts of exhibitions they thought museums should mount if they were serious about addressing injustice and inequality.

After wondering aloud whether art museums were in fact serious about this, they gamely tossed out a few suggestions. What about a show that “documents the growing poverty gap?” Morgan asked. Another idea: She had recently seen a montage of all the faces of U.S. presidents (all male, all but one White): Why not have an exhibition showing what Congress looks like or the CEOs of Fortune 500 companies, she mused. “Wouldn’t that be a powerful exhibit?”

Picking up where Morgan left off, Robertson proposed an exhibition of “visual representations of wealth throughout the centuries and how that wealth has grown,” comparing “White folks versus Black folks and other people of color. I can imagine an exhibition that explores that with graphics.”

I listened to these ideas with skepticism. It was hard to see a museum like the Metropolitan Museum of Art or the Art Institute of Chicago mounting exhibitions of graphics demonstrating the wealth gap — and I couldn’t readily say I wanted them to. Explanatory graphics belong in the news media, I thought; agitprop montages on protest posters. Art is something different.

Yet Morgan and Robertson were merely improvising a response to an unexpected question — and trying to make their point strongly. A year later, I’ve just seen a major exhibition that I think delivers on exactly the kind of thing they had in mind.

And, guess what? It’s brilliant. 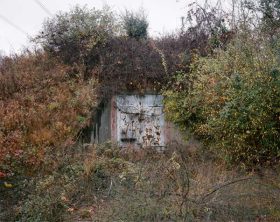 The show is called “Devour the Land: War and American Landscape Photography since 1970.” It’s at Harvard Art Museums, it was put together by curator Makeda Best, and it’s about how photographers have fought to expose the hidden effects of the U.S. military and its associated industries on America’s environment and the health of its population. More broadly, it’s about inequality and injustice.

So it’s an exhibition with a pointed moral agenda. But it’s not preachy or obvious. It’s smart, it’s thoughtful, and it’s visually compelling.

The exhibition focuses on photography since the 1970s, about a decade on from when President Dwight D. Eisenhower warned of the need to “guard against the acquisition of unwarranted influence, whether sought or unsought, by the military-industrial complex.” The work in the show loosely tracks the rapid growth of the same influence he cautioned against.

Its title, “Devour the Land,” is connected to the curator’s most brilliant stroke, which is to include three Civil War-era photographs by George Norman Barnard. Taken in 1864 and 1866, they show U.S. landscapes utterly devastated by war. Working as an official photographer, Barnard had accompanied Gen. Tecumseh Sherman on his campaigns through Atlanta. Sherman’s Union Army had set out to cripple the Confederacy by destroying Georgia’s agricultural and economic infrastructure — to “devour the land.”

Immediately after the war, Barnard returned to the region to photograph the aftermath, sometimes using elevated vantage points. He showed ruined factories, ripped up railway lines and blasted forests. There is something seductively haunted and beautiful about the results. The weirdness of that (shouldn’t we recoil?) sets the tone for a contradiction many photographers in the show grapple with openly.

Photography is, let’s face it, contradictory. As a technology it has a rich history of serving powerful interests that trouble us, from the military to advertising, government and corporate surveillance, and social media. On an aesthetic level, it has a worrying tendency to make subjects that should trouble us unexpectedly beautiful. (The atomic mushroom cloud is a famous example.) And by decontextualizing suffering, it leaves us desensitized.

At the same time, photography can reveal things that people with power would prefer to keep hidden. And as this show reminds us, it has played a crucial part in the rise of environmental consciousness.

Photographer Emmet Gowin fought for nearly eight years to obtain permission from the Energy Department to enter the Yucca Flat in Nevada, the largest nuclear test site on American soil. The hundreds of nuclear bombs detonated at Yucca Flat since the 1950s were mostly set off underground. The massive vaporization of thousands of tons of geological material caused the surface layers to collapse, creating hundreds of deep subsidence craters.

In the late 1990s, Emmet Gowin, who is perhaps better known for his intimate family photographs, spent two years making a series of black-and-white photographs, from elevated vantage points, of terrain that resembles the cratered surface of the moon. 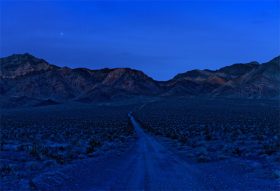 Another photographer, Sim Chi Yin, went to the Nevada test site 20 years later. Sim was commissioned to create a series of photographs after the International Campaign to Abolish Nuclear Weapons was awarded the Noble Peace Prize in 2017. Like Gowin, she noticed how the landscape resembled the moon, but she was also interested in less visible effects. She found out that radiation from the detonations had affected the surrounding communities and their food supplies.

Sim also visited the Pacific Northwest, where mountain runoff used to cool a nearby contaminated nuclear reactor during the years of the Manhattan Project. “Disproportionate rates of cancers and other illnesses” continue to afflict people living “downwind” at both sites, according to Harvard’s wall label. Sim’s photographs deliberately emphasize the beauty of the mountain landscape — putting us in mind of the pristine and unadulterated vision of Ansel Adams — before forcing us to reckon with just how adulterated it is. 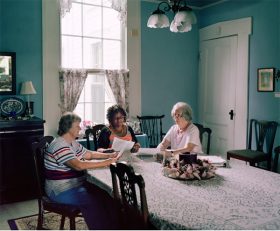 “There are many things that discourage me,” wrote Robert Adams, who also has work in the show, “but I am encouraged by the persistence of conscience.” We all should be. “Devour the Land” highlights the role of photographers like Barbara Norfleet, Stacy Kranitz and Sheila Pree Bright who, from the 1970s on, doubled as activists, and photographers like Jeff Rich, Freda Leinwand and Dorothy Marder, who photographed ordinary people who could no longer stand by without taking action.

Photographers can struggle to connect the moments their cameras abruptly record with the context we need to understand those moments. Conscious of this limitation, Sharon Stewart goes beyond images to incorporate text. Her strong portrait of Lailey Sczepanik (wearing a headscarf that may suggest she is undergoing chemotherapy) and her infant daughter is accompanied by Sczepanik’s own words:

“I have eight kids, and I figured I had better have my well water tested. I live next to two pits. The Bureau of Radiation Control came and they said, ‘What is your reason for thinking you need your water tested?’ Three months later they called me and said, ‘Do not drink your well water. We are sending you a report.’ I have been drinking this water for nine years.”

This combination of words and pictures may be tendentious, but it’s a reminder that photographers with a conscience have more than one tool at their disposal. Another photographer who seems acutely aware of this is LaToya Ruby Frazier. Frazier grew up in Braddock, Pa., and made her name with photographs that connect the intimacy of family life with wider socio-economic injustices in her hometown and in Flint, Mich., among other places.

One of Frazier’s Braddock photographs appears in a section addressing the “slow violence” affecting people who live in contaminated areas and lack the means to do much about it. (The term “slow violence” was coined to denote the ongoing consequences of environmental degradation.)

Frazier’s aerial photograph of the “Edgar Thomson Plant and the Bottom” in Braddock shows a small house belonging to the Bunns, a multigenerational African American family living in a historically African American neighbourhood called the Bottom. As Whites left Braddock and then Black-owned businesses and homes gradually disappeared, the Bunn house remained. But the adjacent lot, covering an area at least 100 times larger than the house, was converted into a dumping ground for city construction. Frazier’s arresting aerial shot shows it packed with white barrels used for waste disposal.

America’s steel industry flourished in response to wartime demand. When the factory at Braddock was the city’s main employer, it made sense to live close to it. It is hard for outsiders to see why anyone would choose to live there now. But in a depressed town with a dwindling population, “choice” may be a luxury. And besides, people have their own reasons.

The growth of the military-industrial complex against which Eisenhower warned seems to have promoted the use of militaristic prototypes to solve all kinds of domestic ills. Thus, we have “wars” not just on terror and drugs but on poverty, homelessness and illegal immigration. Unfortunately, wars produce collateral damage. And the resulting policy initiatives often produce spillover problems, from mass incarceration to further environmental degradation.

It’s great — and brave — that Harvard’s art museum has taken on this subject. But how much more powerful — and empowering — would a show like this be if you took it out of the academic context and gave it the full blockbuster treatment?