You are here: Home » Articles filed under: 'News' » Article: 'Should the Parthenon Marbles'

Should the Parthenon Marbles

November 28th, 2019 | Browse other: News. | Tagged with: Should the Parthenon Marbles Be Returned to Greece? | 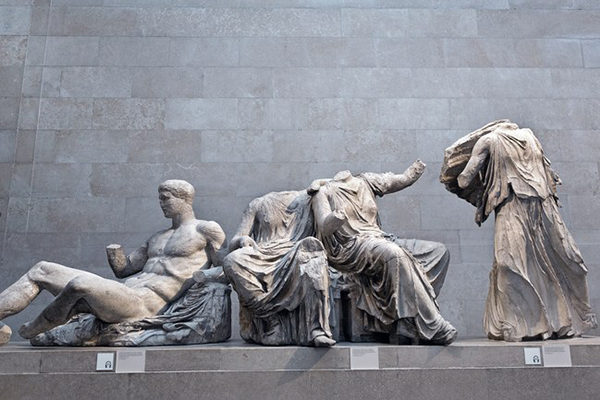 The Parthenon Marbles were taken—or “rescued,” depending on your point of view—from the Acropolis by Lord Elgin in the early nineteenth century and now reside in the British Museum. Photograph by Tony French/Alamy.

Mary Norris, Should the Parthenon Marbles Be Returned to Greece?, The New Yorker, 22 November 2019

Two of my major obsessions—punctuation and Greek—came together recently, when President Xi Jinping, of China, voiced his support for the return to Greece of the Parthenon Marbles (also known as the Elgin Marbles) in the British Museum, and the Times reported, “The Parthenon Marbles include an 80-meter frieze depicting the Great Panathenaia, the ancient Greek feast in honor of the goddess Athena, the muscled body of an ancient Greek river god lounging in midair and voluptuous female figures.”

This sentence cries out for justice. It makes you long to see not only the Parthenon but the serial comma restored to its ancient glory. (Call it the Oxford comma if you must, but be aware that this is another case of a British institution’s appropriating something Greek—“comma” is from the Greek “κόμμα.”) A comma after “midair” would have kept the “muscled body” of the river god from “lounging in . . . voluptuous female figures”er,  (much as he might like to). But the sentence would still be confusing. Are the river god and the female figures part of the frieze or are they separate sculptures numbered among the Parthenon Marbles? And what about that interior comma in the first item of the series, setting off a description of “the Great Panathenaia, the ancient Greek feast in honor of the goddess Athena”? Isn’t that an excuse to haul out the heavy equipment and promote the commas to semicolons? The weightier punctuation would prevent the momentary confusion of “the goddess Athena” with a “muscled body.” Athena is strong, but to my knowledge no nude statue of her with rippling muscles has come to light. The close punctuation would lend grace and dignity to every element of the sentence and the sculpture: “The Parthenon Marbles include an 80-meter frieze depicting the Great Panathenaia, the ancient Greek feast in honor of the goddess Athena; the muscled body of an ancient Greek river god lounging in midair; and voluptuous female figures.”

But to quibble over the punctuation is to miss the point. President Xi (whose transliterated name looks like a Greek letter) was in Athens on business (the Chinese own more than half of the port of Piraeus, according to the Times), and he made his remarks about the return of the Marbles in response to a question from the Greek President, Prokopis Pavlopoulos, after a tour of the Acropolis Museum. The Parthenon Marbles, of course, were taken—or “rescued,” depending on your point of view—from the Acropolis by Lord Elgin in the early nineteenth century, when Greece was part of the Ottoman Empire, and they have been in the British Museum since 1817. China, too, has had pieces of its artistic heritage fall into foreign hands. So Greece and China have this in common, and Greece has an ally in its campaign to bring the Marbles home.

I wonder what Xi would say if he were in the United Kingdom. This past May, I was invited to the Hay Festival, in Wales. It was a big honor—too big an honor, as it turned out. The festival featured stars like Stephen Fry, and Robert MacFarlane, whose book “Underland” had just come out, and a panel on the late historian John Julius Norwich with Simon Schama, Artemis Cooper, and Sir Antony Beevor, plus a lecture on Sappho by Germaine Greer. Long queues formed outside tents that had been erected in the sodden fields. To put the kindest possible construction on it, nobody had trouble getting a seat for my event. I was interviewed about my book “Greek to Me,” which has a chapter on the Acropolis, and my interlocutor put me on the spot by asking where I stood on the Elgin Marbles. It was not the first time I was asked this, but it was the first time on British soil. At the time, I was enjoying the hospitality of an English friend, who had put me up at her home in Gloucestershire and driven me, three times, to Wales for festival events, and who had that very day said, apropos of the Victorian penchant for collecting and the treasures in the British Museum, “It beats having the Turks use them for target practice.”

I tried to be diplomatic, but it is not my strong suit. While I was sweating, a bird flew into the tent, and I hoped it would distract the audience, like a magic act. I believe that the sculptures should be returned, but I have no faith that this will happen. So I counselled acceptance: pieces of antiquity are strewn all over the world, I said, and maybe it’s best to see them as part of our global heritage. The interviewer then opened the session to questions from audience members, many of whom saw this as their cue to flee in order to get a spot in the queue for the next event.

I could not get out of Hay-on-Wye fast enough. I even forgot to pick up the case of wine I had agreed to accept in lieu of pounds sterling. Soon afterward, I received a scathing e-mail from a Greek who had been in the audience. She wrote that she was “truly disappointed” at my response, and so would be all my Greek friends. She was especially distressed that I had not mentioned the new Acropolis Museum, “an ode to the Parthenon.” Like Xi, I have been to the museum and was impressed by it. It is a light-filled multilevel building, whose design permits a person on the top floor to view the Parthenon sculptures up close at the height they occupied on the original roofline, against the background of the Acropolis itself. The display leaves poignant blanks for the missing pieces. Maybe it’s true that if Lord Elgin had not taken the sculptures they would have been destroyed, by the Turks or the Venetians or the pollution in Athens. And it is true that, as stated in the Times article, the Parthenon sculptures are accessible, and free to six million visitors a year. But Athens gets visitors, too, and Greece is no longer under the Ottoman Empire—in 2021, it will celebrate two hundred years since the beginning of its war of independence—and it can take care of its heritage. The river god Kephisos was not meant to be “lounging in midair” in London. He belongs in Athens, in the Acropolis Museum, anchoring the West Pediment of the Parthenon.