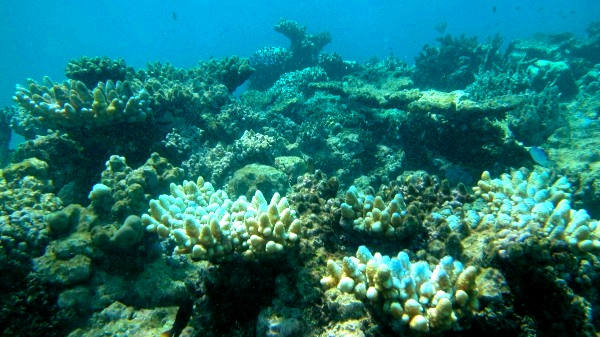 Coral bleaching events have decimated reefs in some parts of Western Australia – but it is unknown if local extinctions have occurred. Source: WA Museum. Photo: Zoe Richards.

The Western Australian Museum’s Dr Zoe Richards considers the importance of examining the Kimberley with a fine tooth comb in an effort to gather marine biodiversity data to inform decision making.

There is a ray of hope in the face of dire predictions about the future of coral reefs, with the prospect that species can shift their distribution ranges to survive climate change.

Unfortunately, it is equally likely some populations, or even entire species, will be driven to extinction.

Either way, data is needed.

The potential for marine organisms to adapt to climate change has been a topic of interest for some time.

However, one salient point often overlooked is that the ‘true impact’ of change in the past, present or future is unknown.

This is because even among important reef-building species like hard corals, there is a lack of species-level baseline data.

Without this data, it is impossible to accurately detect range shifts, population growth and declines, or even responses to management effort.

As a result the lack of data increases the risk of silent extinctions.

In an effort to fill this data void for the Kimberley the Western Australian Museum, in partnership with Woodside Energy, and in collaboration with other Australian museums embarked upon an ambitious project.

Since 2008, surveys of more than 180 sites have documented the diversity and abundance of fish, crustaceans, molluscs, hard and soft corals, sponges, worms, echinoderms (including seastars) and marine plants.

Once these results are finally analysed they will inform science and aid conservation decision-making in this little-known part of the world.

Preliminary data suggests a far greater diversity than expected, with new families, genera and species being described across the range of faunal groups.

More than a thousand species of significance have been recorded, some of which have not been found anywhere else in WA or Australia.

The Kimberley provides a refuge for nationally significant populations of marine fauna and flora requiring protection especially considering that a decade ago we didn’t even know they existed.

Understandably, it is very hard to protect something if you do not know it exists.

The Woodside Collection Project (Kimberley) utilises a comparative methodology that could be undertaken in other regions of the state and the Indian Ocean.

The Houtman Abrolhos Islands off the Mid West and the Pilbara region are prime examples where additional species-level data, across multiple taxa, is required to meet the challenges of species conservation.

As a result, environmental management authorities typically adopt survey approaches, which focus on a big picture outlook of broad-scale ecosystem conditions, rather than monitoring species status.

While broad-scale ecosystem data (such as coral cover) is valuable, it must be acknowledged that managers, who are informed at this level, will in all likelihood not detect biodiversity losses with any acceptable level of certainty until well after serious depletions have occurred (if at all).

Ultimately, the loss of biodiversity is irreversible and the ecosystem effects are unpredictable.

Striking the necessary balance between ecosystem management and obtaining the necessary data to detect species-level changes is a significant challenge requiring urgent attention and investment.

Dr Zoe Richards is a coral biodiversity specialist at the Department of Aquatic Zoology at the Western Australian Museum.