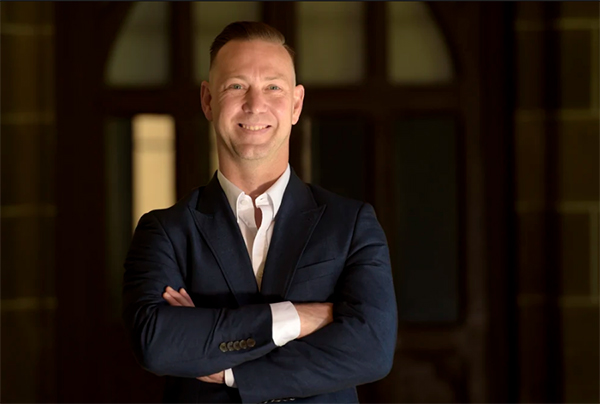 Is an old botanical drawing by an 18th-century scientist ‘art’? Is a photograph of the structure of a molecule, or a black hole, or a diagram of the intricate innards of the ear? What about a rare book, or a First Nations cultural object collected by an anthropologist?

Yes, yes, yes, says Simon Maidment, the National Gallery of Victoria’s curator of contemporary art – and he’s going to prove it. Maidment has been tapped for a new role: associate director of art museums at the University of Melbourne.

His job is to raise the curtain on a new chapter for the university’s sprawling trove of artistic and cultural works, spread across galleries large and small (including the Ian Potter Museum of Art in Parklands and Buxton Contemporary in Southbank) and comprising 40 collections ranging from traditional to contemporary art and beyond.

Its new ‘cultural commons’ strategy aims to mine those treasures to tell bigger stories, in more ambitious and coordinated ways.

“It’s an untapped resource,” Maidment said of the cultural hoard at his new employer (he starts in April). “There is an incredible opportunity to start to tell stories, to present those collections in incredibly experimental ways, or in ways that will really allow others to investigate and propose new ways of looking at them. That’s one of the really exciting parts of the role.”

Maidment has just celebrated two “watershed” moments in his career. The NGV Triennial, a critical and popular success, peppered the gallery with new contemporary art that proved a cultural reawakening for Melbourne after its long pandemic lockdown.

Also, the Victorian government has committed funds to build the NGV Contemporary, a mammoth project that Maidment worked on for “a really solid six years behind the scenes”. Rather than re-commit to the next stage of creating that museum, he felt the university job was “an opportunity to test my leadership skills and programming vision”.

“It feels like the [university] is primed to move into a whole other space,” he said. A lot of what he has planned – and presented to the university during a gruelling interview process in competition with applicants from around the world – has to stay under wraps for now.

But he hints that many of the Indigenous cultural objects and drawings held at the museum are in “urgent” need of reconsideration, outside the Western empirical mode in which they were collected. He has plans to draw on the scholarship talents at the university (and beyond) to help re-examine its collections. And he sees the Ian Potter Museum as a place for exhibitions driven by issues of the day, while Buxton – located near the students at VCA – will be a place that “looks more closely at artistic practice”. Occasionally, the two may come together to explore grand themes.

Rose Hiscock, the university’s director of museums and collections appointed in late 2019, says Maidment presented a “compelling” vision of the potential to put their collections to better use alongside new scholarship and academic discourse.

Maidment’s first big job will be the 2022 reopening of the redeveloped Potter museum, including its first exhibition, which Hiscock says “will be a knockout”.

“The university has a diverse and rich cultural collection and cultural remit, and we want to share that with the community, with audiences in Australia and Melbourne but also around the world,” Hiscock said.