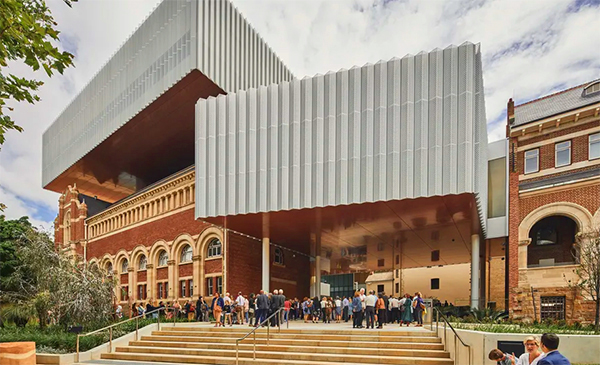 The long-awaited $400 million WA Museum Boola Bardip has opened, close to a year after the building was completed.

Architects Hassell and OMA describe the museum as “a collection of stories about Western Australia’s diverse and rich history, and contemporary culture.” Its name, Boola Bardip, means “many stories” in Whadjuk Noongar language.

A number of heritage buildings at the Perth Cultural Centre, including the Old Gaol, the Jubilee Building, the original Art Gallery and Hackett Hall, have been enveloped in two intersecting circulation loops – one vertical, one horizontal – culminating in the centre at a public space referred to as the City Room, which accommodates a variety of activities and exhibitions. A large volume cantilevers over Hackett Hall, which shelters the City Room. 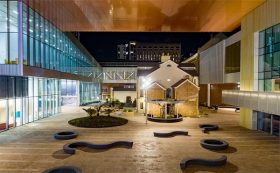 “The museum is unique in both the Australian and international cultural landscape,” said OMA regional director Paul Jones. “It invites visitors to not only passively look at exhibitions, but also become active creators of their own museum experiences. Visitors can choose museum journeys relevant to them and engage in dialogues with each other.”

The WA museum project had been mooted for more than a decade in Western Australia, originally as a $500 million project at the site of the East Perth Power Station in 2008. Those plans were scrapped in 2009 following the election of a new government.

In 2012, the Barnett government announced plans for a new museum at the Perth Culture Centre and in late 2014, it invited expressions of interest for a managing contractor. Hassell, OMA and Brookfield Multiplex were appointed in April 2016.

“The new WA Museum Boola Bardip is simply spectacular,” said premier Mark McGowan. “I have no doubt Western Australians will be blown away by its stunning architecture and fascinating exhibits.”

Admission to the museum is free for the first 18 months.