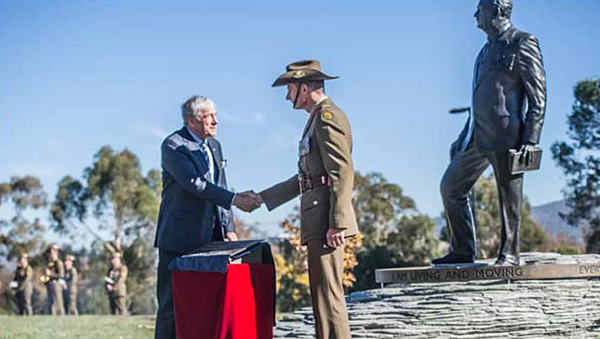 Blake Foden, ‘One of the greatest Australians ever’: Sir John Monash immortalised, The Canberra Times, 4 July 2018

Few have had the same aptitude for battle as General Sir John Monash, yet the man regarded as one of Australia’s greatest ever military commanders hated war.

“He despised its horror [and] the inefficiency, which he described as ghastly, the impossible cruelty and the misery of war,” Australian War Memorial director Dr Brendan Nelson said.

Yet, as Dr Nelson points out, the new commemorative sculpture of Sir John in the war memorial’s sculpture garden couldn’t be in a more appropriate place.

“He, like this place, was reminded that in the end there are truths by which we live that are worth fighting to defend politically, diplomatically and at times, militarily,” Dr Nelson told a ceremony at the memorial on Wednesday.

“… Here at the Australian War Memorial, we reveal our character as a people, our soul.

“The paradox is that it’s not actually about war. It’s in a context of war, but this place is about love and friendship.”

Sir John is just the third person to be honoured with a sculpture at the war memorial, joining stretcher bearer John Simpson Kirkpatrick and Sir Edward “Weary” Dunlop.

The monument, created by Charles Robb and Sarah Holland-Batt, was unveiled on Wednesday to coincide with the 100th anniversary of the World War I Battle of Hamel.

During the 93-minute battle that cemented his reputation as a visionary, Sir John led the victorious Allied troops against the Germans.

He meticulously planned every detail, using a combined arms approach that brought together artillery, infantry, tanks and aircraft in what has been described as the first modern battle.

“Under Monash’s leadership, the Australian Corps proved it was the equal of any other formation in the British expeditionary force, successfully fighting a sophisticated enemy in the main theatre of the war.”

But while he is best remembered as a military commander, Sir John’s accomplishments are not limited to his time in uniform.

Dr Nelson said he deserved to be remembered as “one of the greatest Australians ever” for his efforts to unite the young, fractured country and uphold democracy when he returned after World War I.

He said that was why the sculpture depicted Sir John, circa 1924, wearing a civilian suit and his Returned and Services League badge, while carrying a book.

“It’s easy for us, in our comfortable lives, to forget that this country has never been more divided than it was in the 1920s,” Dr Nelson said.

“Some people lead from position – general, chairman of a board or captain of a team. Some people assume position, but instead lead from principle.

“Occasionally, we get someone who leads from both, and John Monash was such a man.”

“I am also delighted that he is depicted in civilian pose, because our army fights for and represents our Australian civil society and its values,” he said.

“As important a military figure as Monash is, we miss much if we only focus on Monash the general.”