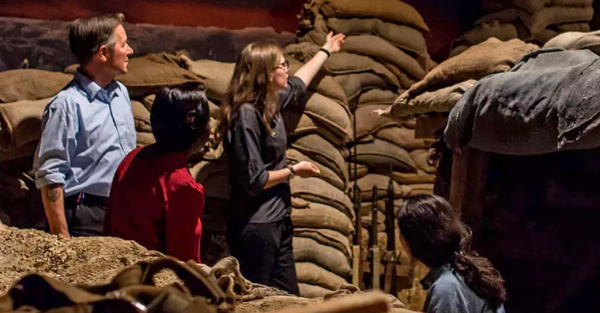 Sir Peter Jackson’s Great War Exhibition was a pilot for a government-funded $237 million national war museum, but delays and cost blowouts have thrown the ambitious plans into doubt. View video.

Documents obtained under the Official Information Act call the GWE – an exhibit intended to run between 2014-18 as part of centenary commemorations for World War I – a “pilot for a permanent military heritage centre in the Dominion Museum Building”.

A indicative business case prepared last July put acquiring the central Wellington building and developing it as a national war memorial centre – at a likely cost of $237m – on a shortlist of options to be explored further.

DEVELOPMENT BILL OF UP TO $236.8M (p. 48)
View the entire document with DocumentCloud

Independent historian Dr Stephen Clarke, former chief executive of the Returned Services Association, said the GWE experience had revealed “obvious pitfalls” around the potential for delays and cost-blowouts for the national museum project.

Clarke said there were issues in the military heritage – chiefly with branches of the armed forces maintaining separate, largely privately held, collections – but these could be resolved by much more cheaply by expanding the mandates of either Te Papa or the Auckland War Memorial Museum.

“Once upon a time I would have been a really strong supporter of the Dominion Museum option, but the cost side of it is extreme and the whole sector is under pressure,” he said.

Earlier this week the Herald reported ministers had been aware for years about financial and accountability problems with the GWE – including its centrepiece exhibit being delivered three years late – and taxpayers faced a $12.7m bill when it became time to dismantle it.

Arts, Culture and Heritage Minister Grant Robertson would not be interviewed about current plans for the museum this week, but earlier said his focus was on trying to extend the lease allow the GWE to avoiding closing early.

Documents show a lease extension – understood to be opposed by the current tenant Massey University – would also allow the Government time to prepare a detailed business case to justify buying and redeveloping the Dominion Building as a national military museum.

This GWE pilot had inauspicious beginnings. Documents show despite the date of the World War I commemorations being known for a century, government decisions were only made at a very late stage leading to a haphazard process lacking usual public sector oversight and accountability.