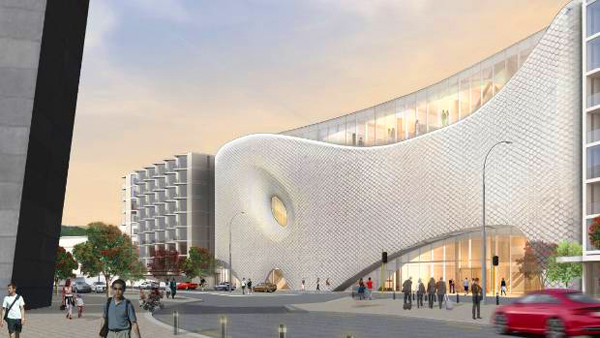 Sir Peter Jackson’s Wellington Movie Museum is one step closer to becoming reality, and provisional booking for the combined Convention Centre has started.

More than a year after plans for a $150 million movie museum and convention centre were approved, the first resource consent has been lodged.

The project has been mired in delay as the interior plans have been developed, and it is understood the cost to ratepayers could rise as Jackson’s vision for the museum grows.

The three-storey building on Cable and Wakefield streets will include a 6000sqm convention centre on the top floor, capable of hosting 1100 people, and a 10,000sqm movie museum on the bottom two floors.

The consent includes a project overview for the base-isolated “superstructure” that will be largely steel-framed, with reinforced concrete in the-ground foundation and basement works.

“It is envisaged that the Movie Museum fit out will also commence during the course of construction, which will be undertaken by separate contractors working directly for the Movie Museum,” the plans say.

TMML is the company formed by Jackson and Sir Richard Taylor and is responsible for the fitout and operation of the museum component of the project.

TMML project director George Hickton​ said the lodging of resource consent was another positive step along the journey towards realising the vision of the Movie Museum, a project that has been more than a decade in the making.

While Jackson puts the final touches to his design plans, a consent with an assessment of environmental effects has been lodged.

A second consent application, with Wellington City Council, will be lodged shortly.

The environmental application seeks resource consents from Greater Wellington Regional Council for activities associated with the construction of a new building, including the excavation of approximately 900 square metres basement site wide excavation to enable base isolation, dewatering activities to allow for the earthworks with a duration of five years, installation of bores for piles and for monitoring activities, stormwater discharges from construction activities (with a duration of five years) and from the operational site.

The Movie Museum is expected to be a destination attraction, while the convention centre will be able to host conferences of up to 1000, with theatre style seating for around 1900 people.

“This project will be transformative for Wellington – it will create 540 new construction jobs during the build, 483 new tourism and hospitality sector jobs and contribute $38m per year to the local economy. It will also reimagine this area of our city.”

Putting all the creative genius of Jackson and Taylor on display, just across the road from Te Papa, would mean a world class tourism attraction, he said.

It was expected to attract more than 300,000 people a year, while also helping to give the city’s convention industry a point of difference, he said.

Feedback from the Wreda business events team was that there was so much national and international interest in the convention centre, they have taken shadow bookings for 2021.

Council economic development portfolio leader Simon Marsh said:  “We’re close to locking in final elements, and have progressed to the stage where we can lodge a resource consent application to get the project underway. From here it will be a matter of confirming the final design, fit out elements and contracts with TMML.”