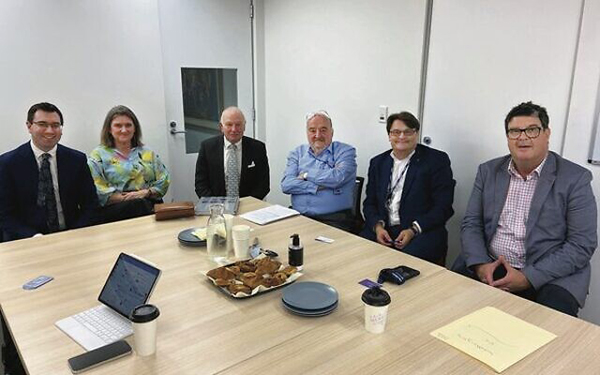 “It’s a sign they’re taking this seriously and that is much appreciated, not only to the Jewish community, but to the broader Wollongong community…”

HISTORIAN Konrad Kwiet of the Sydney Jewish Museum (SJM) has been tasked with investigating the past of Bronius “Bob” Sredersas after shock Nazi allegations surfaced about the former Wollongong art collector.

Sredersas was a well-known local identity who arrived in Australia from Lithuania in 1950 and went on to donate his entire art collection to the Wollongong Art Gallery before his death in 1982.

His donation came to be known as The Gift and Sredersas has a gallery named after him. The AJN understands a statement will be placed at the Wollongong Art Gallery and on its website noting the allegations.

A four-year investigation into the history of Sredersas by former local councillor Michael Samaras revealed the well-known immigrant was likely a Nazi collaborator associated specifically with the massacre of Lithuanian Jews during the Holocaust.

Wollongong mayor Gordon Bradbery met with the NSW Jewish Board of Deputies (JBD) and the SJM last Thursday.

Kwiet, a Dutch Holocaust survivor himself, has a PhD in Nazi policy and will work to verify claims that Sredersas was a member of the Nazi Party’s Schutzstaffel (SS) and its intelligence arm, Sicherheitsdienst (SD).

SJM CEO Kevin Sumption said Kwiet is ideally placed to investigate the case. “The Museum takes an interest in this case as we act as a voice to the victims of the Holocaust, and support justice for those murdered,” said Sumption.

“We were pleased to meet with the Lord Mayor Gordon Bradbery and other council staff, along with the NSW Jewish Board of Deputies to offer our assistance.

“Emeritus Professor Kwiet is a historian and scholar of the Holocaust, having worked in universities, museums and research centres around the world.

“We see the opportunity in assisting Wollongong Council as one of educating the community about the history of the 27,000 Holocaust survivors who made Australia home after the Second World War.”

JBD CEO Darren Bark praised Bradbery and Wollongong Council for taking up their offer of assistance and said the meeting was a productive one. “We’re very grateful that Council met with us today,” he said.

“It’s a sign they’re taking this seriously and that is much appreciated, not only to the Jewish community, but to the broader Wollongong community who deserve answers about this individual’s past. This is about education and empowerment.

“The allegations are deeply concerning and that is why we reached out to Council for an urgent meeting to establish whether or nor this person had any involvement in the Nazi Party and most concerningly, its intelligence arm.”