You are here: Home » Articles filed under: 'News' » Article: 'SJM’s duty to educate against discrimination'

SJM’s duty to educate against discrimination 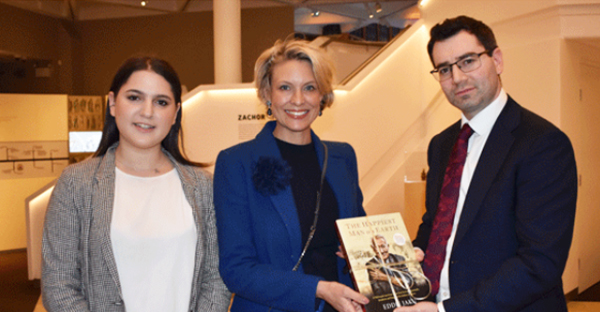 Katherine Deves keeps her promise to visit the Sydney Jewish Museum, J-Wire, 8 May 2022

The Liberal candidate for Warringah, Katherine Deves accepted an invitation from The New South Wales Jewish Board of Deputies and The Executive Council of Australian Jewry to visit The Sydney Jewish Museum following her paralleling lobbying prevention transgender participation in women’s sport to opposing the Holocaust.

Prior to her visit, Ms Deves told Mr Bark that as a child she had read The Diary of a Young Girl by Anne Frank, and in her adult years The Rise and Fall of the Third Reich, and had long held an interest in 20th-century history.

She told Mr Bark she had also previously visited the United States Holocaust Memorial Museum in Washington and Dachau concentration camp in Germany.

After the tour, Mr Bark handed Ms Deves a copy of the late Holocaust survivor Eddie Jaku’s book, The Happiest Man on Earth, as well as The Choice by Edith Eger.

NSW Jewish Board of Deputies CEO Darren Bark said, “This was an important visit by Ms Deves and we are grateful that she took the time to tour the museum, meet with a Holocaust survivor and learn what Nazism was really like.

“Ms Deves made the right decision to accept our invitation. We hope she will learn from this experience and reflect upon her visit and the incomparable devastation caused by the Nazis.

“The Nazis murdered six million Jewish people, Australian Diggers, LGBTQIA+ people, and anyone who was ‘different’. Words of hate can lead to genocide and we have a responsibility to use our words wisely.

“Nazi and Holocaust analogies cannot be used to compare modern day events in Australia. It is extremely concerning to see a rise in the use of these comparisons during the federal election campaign. This must stop, enough is enough.”

Sydney Jewish Museum CEO Kevin Sumption said, “The Sydney Jewish Museum invites anyone, with any background or set of beliefs to visit us so they can learn about the Holocaust, hearing directly from survivors about how this chapter of history reverberates to this day. We view it as our duty to educate against discrimination, address misinformation, and advocate for human rights within a modern Australian context.

“Within our exhibitions, visitors are informed of the discrimination against the LGBTQIA+ community both historically and locally. Our Holocaust exhibition educates visitors about the widescale, systematic persecution of LGBTQIA+ people among other groups during World War II, while our Human Rights exhibition explores the human rights challenges and struggles faced by the LGBTQIA+ community in Australia. By sharing important lessons from history, both abroad and in our own backyard, we help challenge assumptions, start respectful conversations and inspire meaningful change.“

Executive Council of Australian Jewry representative Alissa Foster commented, “I am glad Ms Deves accepted our invitation. The Sydney Jewish Museum provides all visitors with an invaluable learning opportunity. Comparing any aspect of life in free and democratic Australia with the murderous brutality of the Nazi dictatorship in Germany is not only historically fallacious but also disrespectful and callous towards those who survived Nazism. Having now met with a survivor and with people like myself who lost family in the Holocaust, I also hope Ms Deves has a deeper insight into how readily hatred and prejudice of any kind can descend into unspeakable barbarism.”

She posed on Facebook: “The Sydney Jewish Museum is a stark memorial to a historical horror and a testament to the resilience of the Jewish people.

An exhibition like this is a sobering reminder of the atrocities that can be committed and how fragile human lives are. The Holocaust must never be allowed to happen again, and under no circumstances must it ever be trivialised.
I am humbled and honoured to have been extended this invitation today. I’m deeply grateful to Mr Darren Bark of the NSW Jewish Board of Deputies, Mr Peter Wertheim of the Executive Council of Australian Jewry, and Kevin Sumption CEO of the Sydney Jewish Museum.
I would like to extend special gratitude to author and child survivor of the Holocaust Paul Drexler for sharing his deeply personal and moving testimony.”
The incumbent member for Warringah is independent Zali Steggall.
Positions Vacant » View All
» Collections and Database Administrator – QVMAG
» Team Leader Learning & Engagement – QVMAG
Latest News » View All
Wealthy collectors should invest in art schools
not auctions to keep the industry alive Read more.
Paris reopenings – Bibliothèque nationale
Richelieu site (+ Musée Carnavalet) Read more.
Escaped pet parrots threaten NZ birds
– why a ban is the best solution Read more.
Perspectives on Tas tiger’s past & future
via collns & research @ TMAG, MV & AM Read more.
Giant petrel fossil discovered at Taranaki
named by Te Papa researcher & curator Read more.
Top +
Council of Australasian Museum Directors c/o Lynley Crosswell, Museums Victoria, GPO Box 666, Melbourne VIC 3001, © CAMD 2023
Copyright: All information and resources provided on this website remain the copyright of the Council of Australasian Museum Directors. Permission is granted for viewing and downloading for personal and not for profit purposes. Those wishing to reproduce any materials for commercial, educational or other uses are requested to contact us.
Disclaimer: The content of this website is provided for information purposes only and is not intended as a substitute for professional advice. No claim is made as to the accuracy or authenticity of the content of the website. The Council of Australasian Museum Directors does not accept any liability to any person for the information or advice (or the use of such information or advice) which is provided on this website. The information on our website is provided on the basis that all persons accessing the site undertake responsibility for assessing the relevance and accuracy of its content. No responsibility is taken for any information or services which may appear on any linked web sites. Hostgator.
.