You are here: Home » Articles filed under: 'News' » Article: 'Slavery at Rijksmuseum: How unflinchingly'

Slavery at Rijksmuseum: How unflinchingly 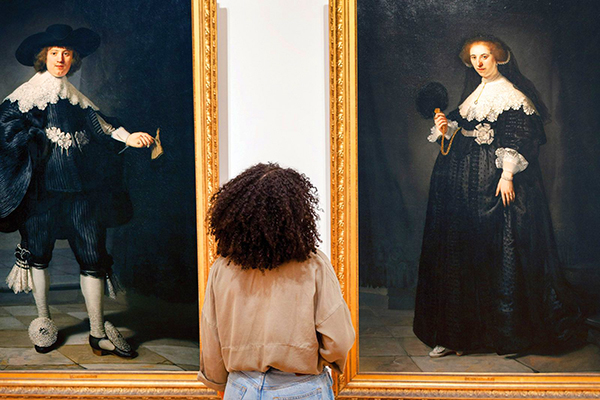 Rembrandt’s life-sized portraits of wealthy Dutch couple Marten and Oopjen (1634), prompt visitors to the exhibition to ponder the source of their wealth Rijksmuseum.

Carine Zaatman, The Big Review: Slavery at the Rijksmuseum, The Art Newspaper, 9 July 2021

Four years in the making, the exhibition has gained new urgency after the murder or George Floyd. How unflinchingly does it address its subject and its collection?

Five bells hang in a row above the entrance to Slavery, an exhibition at the Rijksmuseum keenly anticipated by a restless locked-down Dutch public for more than two months. Collected from the former Dutch colonies of Batavia, Curaçao, Suriname, the Cape of Good Hope and Demerara, the bells signal the vast scale of Dutch slavery and colonialism from the 17th to the 19th century. In their elevated position they appear weighty and ominous, yet are distant and mute. Their original function may have been to control every moment in the lives of enslaved people, but now, as inert museum objects, they embody the challenge any exhibition dealing with this history faces: how can the violence of slavery and colonialism be conveyed without re-enacting it, without re-affirming notions of European supremacy?

Curators Eveline Sint Nicolaas, Valika Smeulders, Maria Holtrop and Stephanie Archangel opted to address the substantial representational challenges inherent in the subject matter by structuring the exhibition around ten stories of people entangled in the slave trade in divergent ways. Of course, the backdrop to the exhibition is the Rijksmuseum itself, whose holdings were once viewed as emblematic of the “Golden Age”. As an institution entrenched in Dutch national identity, the museum has habitually evaded addressing the ways in which its collection embodies the wealth that the Netherlands extracted from colonies through slavery. The curatorial strategy of the exhibition was conceived as a break from this convention and instead attempts to convey the perspectives of enslaved people.

Slavery begins with some historical contextualisation mediated through La Bouche du Roi (1997-2005), an installation by Romuald Hazoumè that evokes a slaving vessel, before narrowing its focus to the ten stories. The first of these is of João, abducted in Africa and conveyed to Brazil. In the centre of the room dedicated to João lie foot stocks designed to constrain enslaved people. The next story is of Wally, who laboured on a sugar plantation in Suriname. With his story, the exhibition illuminates the excruciating work entailed in the production of sugar, as well as drawing attention to the technologies of control exerted remotely from the Netherlands by an absent plantation owner. 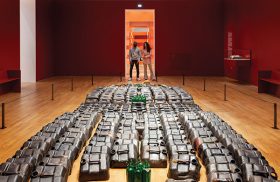 The exhibition then turns its gaze towards the Rijksmuseum’s collection with the story of Oopjen, a wealthy Dutch woman who benefited from her two husbands’ involvement in slavery. Portraits of Oopjen and her first husband, the largest ever painted by Rembrandt, dominate the space. In this encounter with Rembrandt’s work, visitors are prompted to reflect on what made the splendour of the sitters’ attire possible in the first instance.

The story of Paulus, who worked as a servant in the Nassau La Lecq household, is likewise connected to bourgeois life in the Netherlands. A golden collar emblazoned with the Nassau coat of arms, which upon accession was classified a dog collar, is displayed next to an 18th-century bust of an “African” man wearing a similar collar and a painting in which a Black timpanist who, even as a vital member of a cavalry regiment, wears the same. The Van Bengalen story pertains not to one person, but rather describes how a multitude of people were captured around the Bay of Bengal, enslaved, robbed of their names, and transported to Batavia, the Banda Islands and the Cape Colony. The network of slavery and colonialism is evidenced by the distribution of the Van Bengalen name throughout a world ruthlessly remade by the VOC (Dutch East India Company). 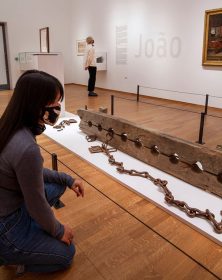 Rebellion, refusal and emancipation form a nexus of the last five stories. Surapati escaped from slavery, led a group of warriors and was killed in battle against the VOC military. He was valorised in his own time, with his accomplishments recounted in numerous babads, Indonesian historical texts. The contradiction between these accounts and colonial documents demonstrates the limits and failures of colonial archives to yield counter-colonial histories. Sapali’s story speaks of a different bodily investment in rebellion. She fled from a plantation in Suriname after concealing rice in her plaited hair so that she and her companions would have a source of food once safe. Today this variety of rice—Sapali and Milly—is still cultivated by Okanisi people in Suriname. Tula, enslaved to work on a plantation in Curaçao, was inspired by the liberation of Saint-Domingue (present-day Haiti) at the hands of freedom fighters. He advocated for the abolition of slavery in Curaçao on principles promoted by European Enlightenment. When his arguments were rebuffed, he led an insurrection that resulted in his execution by the colonial government. Dirk, though a Dutch abolitionist, was ultimately incapable of understanding what liberation truly entails. While he promoted the ending of slavery, he despaired at the unwillingness of freed enslaved people to remain in his service. The last story in the exhibition is of Lohkay, an enslaved woman who fled a diamond plantation. She was recaptured and one of her breasts was amputated as punishment. Undaunted, she escaped once more and remained free. Her story retains a potent, stirring presence in oral tradition.

By sidestepping self-reflection on the Rijksmuseum as an imperial institution, Slavery has not fully apprehended the stakes of current contestations

Even though Slavery weaves these stories together skilfully and sensitively, it stops short of reflecting critically on the conventions of museum display, with the result that the stories acquire a curious quality of fixedness, or pastness. Also troubling is that the exhibition remains largely silent on the Rijksmuseum’s own complicity in cultivating and maintaining imperialism within its institutional operations (as opposed to oblique references to slavery in their collection), as though it were an institution made new, unsullied. 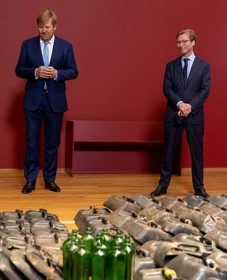 I can therefore only see Slavery as a first step in which directions for future work are most clearly implied in the additional material generated by the exhibition. For instance, the catalogue, a trove of thoughtful and provocative essays, and an impressively rich website will serve as valuable resources. A highlight of the exhibition’s online presence is a symposium on sources for the history of slavery. Contributors argued for broadening the scope of what should be considered sources, and called for interdisciplinary methodologies that use music, dance, oral history and literature. Another critical intervention is the & Slavery project, manifesting as an alternative museum guide that juxtaposes existing labels for objects in the permanent collection against newly written ones identifying connections to slavery. Look at Me Now, an installation by David Bade, Tirzo Martha and their team, invites visitors to reflect on the material they have encountered as they exit the exhibition space. Being a collaboration-in-process, the installation is self-consciously unfinished and energetically discombobulated, making tangible how unresolved the legacies of slavery really are. Such future-oriented work is indispensable in a world where the reverberations of slavery and colonialism have not dissipated.

In many respects, this is an exhibition whose time has come. Four years in the making, Slavery was developed via a consultative process that sought input from descendant communities as well as scholars and activists across the globe, and drew on sources other than colonial archives and collections. But then came 2020, which saw intensified activism under the banner of #BlackLivesMatter after the murder of George Floyd. As institutions clamour to publish statements proclaiming solidarity with the oppressed, vocal sectors in purportedly liberal democracies are pushing back against any real change. Debates on how to deal with the after-effects of slavery are happening in the now—there is no “after” position to claim. By sidestepping self-reflection on the Rijksmuseum as an imperial institution, Slavery has not fully apprehended the stakes of current contestations, missing a vital opportunity to amplify contemporary voices of resistance, and thereby reimagine the role museums could play in fashioning an equitable future.

• Carine Zaayman is a postdoctoral researcher at the Vrije Universiteit, Amsterdam and the Research Centre for Material Culture, Leiden