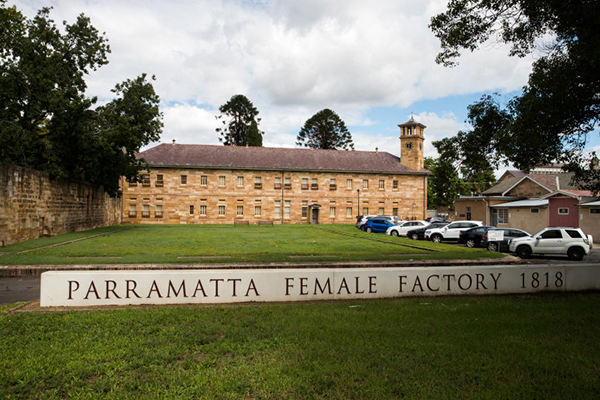 The Parramatta Female Factory will be turned into a museum. Photo: Edwina Pickles.

Linda Morris, It was once home to thousands of prisoners, now it’s set to be Sydney’s next museum, The Sydney Morning Herald, 1 December 2021

Parramatta’s Female Factory – where thousands of convict women were held on arrival in the NSW colony – is to be converted into a history museum.

Almost $54 million was announced Tuesday by the NSW government to “secure, restore and preserve the culture, heritage and future use” of the three-hectare heritage precinct by the Parramatta River.

The historic Francis Greenway-designed Female Factory is the crowning jewel in the riverside precinct which is also home to the former Parramatta Lunatic Asylum, Roman Catholic Orphanage, and Parramatta Girls Home.

Collectively the buildings offer insight into Australia’s colonial past and the era of institutional confinement of vulnerable women and children.

“After 10 hard years,” she said. “We’re over the moon because it has been a long struggle. Literally, this time 10 years ago we were advocating against a computer data room going into the third class penitentiary sleeping quarters.”

The factory was the site of Australia’s first industrial action when women protested a cut in rations and poor conditions, she said. “With picks and whatever they could find they broke the gates of the factory and escaped into the town.”

The youngest convict to pass through the factory was aged just eight years old. She was accused of poisoning her mistress.

The bulk of the funding – $43.7 million – will go towards the conservation and upgrade of the historic buildings and the opening of a tech-startup hub and cafe.

Keller House, part of the Parramatta Girls Home, will be repaired and maintained as a Keeping Place for members of Australia’s Stolen Generation.

Listed on the national heritage register in 2017, the Female Factory was built by Governor Lachlan Macquarie to house female convicts in the colony.

“This funding lays the foundations for the complete restoration of the historic site, transforming the Parramatta Female Factory into a museum that tells the stories of our history for generations to come,” Minister Harwin said.

“This remarkable location deserves to be properly preserved and protected, and I am committed to working towards achieving a World Heritage listing for the site.”

A startup hub for new tech businesses and a cafe will be first to open in 2022.

A final business case on the Parramatta Female Factory museum will be developed by Sydney Living Museums, caretaker of the Hyde Park Barracks and Vaucluse House, and presented to the government in the election year of 2023.

The next aim of Parramatta Female Factory Friends is World Heritage listing.

“At this point, there are 11,000 hand-signed petitions sitting in Federal Parliament waiting for federal and state agreement. The journey is not over yet,” Ms Hendriksen said.