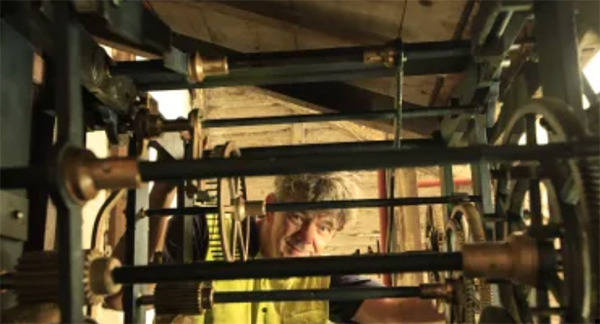 Tim Barlass, The master working round the clock to keep Sydney ticking along, The Sydney Morning Herald, 7 January 2020

It is reasonable to assume that time dragged somewhat for Sydney’s first convicts.

Detention in the fledgling colony for a minor misdemeanour such as petty theft and you’d be counting the days, never mind the months or years.

Was it to rub salt in their wounds, then, that atop the Hyde Park Barracks – home to some 600 convicts – that a clock was installed in 1819?

For unknown reasons a new mechanism was installed in 1839. The works were accurate to within a fifth of a second on a daily basis. That matches up pretty well to the accuracy of a contemporary quartz watch.

On Monday the refurbished works were reinstalled and ticked again for the first time since November having been refurbished to return them to their original timekeeping accuracy.

There’s one tick every two seconds. That’s how long it takes the 220 pound (kilos) pendulum suspended on a 4.7 metre wooden shaft to swing from side to side to operate the escapement. 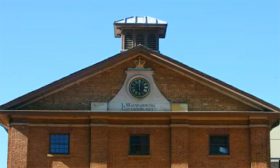 Hyde Park Barracks is due to reopen in February. Credit: SMH

Master clockmaker Andrew Markerink who fixed it spoke a few minutes or so after swinging the pendulum back into life.

Think of a familiar clock face in Sydney (and beyond) and chances are Mr Markerink is the one who has kept its heart beating. That includes the Town Hall clock, Customs House and Little Brother at the GPO building, now The Fullerton Hotel.

He has also fixed the chime which was tested for the first time on Tuesday. The hammer used to rest on the bell after striking which muffled the sound somewhat. Walk past Hyde Park barracks in the next few days and you will be treated to a crisp and clean chime that will carry a little bit further along Macquarie Street.

The work is part of an $18 million refurbishment to the UNESCO heritage listed barracks which has been closed since last January and is scheduled to reopen on February 21.

Mark Brandon, heritage project manager of capital works for Sydney Living Museums said there had been some unsympathetic repairs in previous years.

“We try to conserve anything that is original,” he said. The copper dial has been restored five times, a victim of city grime and pollution.

“We don’t like to replace materials but rather conserve them as best we can.

“Someone had painted what I thought was a swastika on the bell but the symbol is reversed which means peace.” The geometrical figure is an ancient religious icon.

The Hyde Park Barracks Museum renewal project is to focus on telling a significant part of Australia’s convict story, its impact on First Nations people and the site’s early contribution to immigration.

The goal is to tell the history in a more engaging way, triple paid visitor numbers to 300,000 and increase domestic visitors – overseas tourists account for 70 per cent. Tickets are available from January 16.