March 13th, 2020 | Browse other: News. | Tagged with: Aboriginal voices to tell the history of Australia’s convict past, Hyde Park Barracks |

Why we need Aboriginal voices to tell the history of Australia’s convict past, The Guardian, 28 February 2020

When Hyde Park Barracks reopens in February, it will include Aboriginal voices and perspectives to tell the story of Australia’s convict history.

Hyde Park Barracks holds a lot of stories. This Sydney landmark was the epicentre of Australia’s convict system, serving as a lodging place and administrative hub for convicts throughout the first half of the 1800s. The barracks has also been a depot for female migrants, an asylum for vulnerable women and more recently, a symbol of colonialism for Aboriginal people.

In February, the barracks will reopen after a 12-month closure as an entirely different museum experience. Central to the renewal was Sydney Living Museums’ understanding that it needed to create an experience that, in telling the story of Australia’s convict history, also acknowledges the impact of this history on Aboriginal country and communities.

“We looked at how this building, as a centre of convict administration, was in charge of sending convict labour out and transforming Aboriginal country, and what this meant for the Aboriginal people whose country was on the receiving end of all of these convicts and settlers,” Hise says. “We wanted to fill out the story and tell all sides of what the convict history really looked like.”

It’s not really telling history if you’re only telling part of it. Beth Hise

Much of that history is ugly. “Aboriginal communities had to adapt to rapid and often quite violent changes – they lost access to food and resources, important sacred and ceremonial sites were destroyed, and people were killed,” Hise says. But it’s a history that Sydney Living Museums was determined not to shy away from.

“Well, it’s what happened,” Hise says. “So it’s part of telling the story. I think we’ve tended to silo our understanding of history to ‘convict history’ and then ‘Aboriginal history’ as a separate thing, but of course it was never lived that way. It was lived very much as an integrated whole. And we’re trying to bring some of that to our visitors.”

The museum’s narrative puts particular focus on the Myall Creek Massacre, in which at least 28 Gamilaraay people were murdered by 11 serving and former convicts and one free settler, some of whom were eventually brought to trial and found guilty in a landmark case. The massacre is commemorated in the museum’s Frontier Violence exhibit, in which poignant video and audio are used to immerse audiences in the story and the lead-up to the massacre. It features spoken word narratives in Gamilaraay, which are then translated into English.

Filmmaker Brendan Blacklock capturing some of the immersive footage that will surround visitors in the Frontier Violence exhibit.

Sydney Living Museums chose to focus on Myall Creek because of its links to the barracks. “We wanted to look at how the convict labour force had really far-reaching impacts beyond the building of roads and the farm labour on stations,” Hise says. 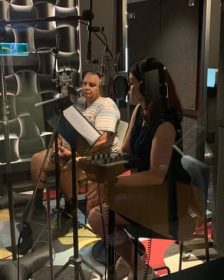 Clayton Blacklock and Emily McKnight in the recording studio December 2019.

“When we started looking at what those stories would be with our Aboriginal staff at the time, Myall Creek really stood out. For one thing, 11 of the 12 men who were the perpetrators of the massacre were convicts, and of those over half had been living in the barracks or had been assigned directly from the barracks. So there was this direct connection between the administration of the convict system and those men being on Gamilaraay country.”

“The connection again deepens with the barracks because those convicts who were witnesses to the crime, who were going to be testifying on behalf of the victims, were initially held at the barracks in advance of the trial, which happened across the road at the Supreme Court.”

When visitors leave the Frontier Violence exhibit, they’ll be able to look directly out of the window at the Supreme Court, where some of the murderers were eventually sentenced to hang.

To ensure it documented Myall Creek thoughtfully, Sydney Living Museums worked with the Blacklock family, descendants of a survivor of the massacre. Aunty Sue Blacklock, a Gamilaraay elder, says she has known about the massacre for as long as she can remember.

“It was very emotional,” she says of hearing about Myall Creek as a child from family members. “I wanted to ask them, why did it happen? Why did they do it? And no one knew.” 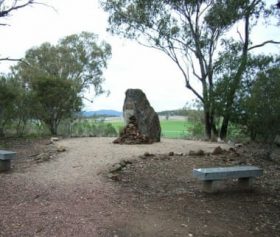 Aunty Sue says Sydney Living Museums reached out to her family because “they wanted the truth” about the massacre. She hopes the Frontier Violence exhibit will help to educate Australians about the country’s true history, and that international visitors to the museum will be able to reflect on their own nations’ relationships with their First Nations people. ”It’s all about reconciliation and forgiveness,” she says.

Hise agrees. “There’s an endless well of emotion when we’re talking about these stories. But telling them can also bring us together,” she says.

“We’ve worked to ensure we’re telling that story in the words and in the spirit of how [Gamilaraay] want to present it. It’s quite remarkable working with people who are custodians for stories that are deeply tragic, and how it’s so important to them that these moments are not lost.

“Museums of history can’t be places that always try to tell a positive story, because that’s just not what’s happened. We felt very strongly that a part of Hyde Park Barracks’ narrative needed to recognise its role in that history. By taking on that responsibility, it’s part of coming together and facing a different future.”

Book your visit to the reimagined Hyde Park Barracks.