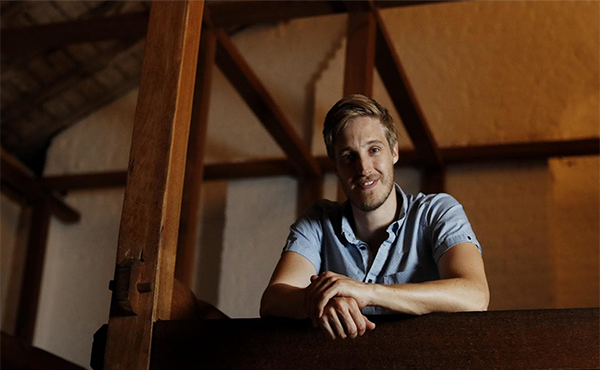 Actor Christopher Stalley at the Hyde Park Barracks, where he is playing the part of a convict for a new sound installation. Picture: Nikki Short.

A new interactive tour of Sydney’s Hyde Park Barracks will bring the convict experience to life.

Hyde Park Barracks in Sydney is one of the city’s most handsome colonial buildings, an example of early Georgian architecture designed by convict architect Francis Greenway. Its classical proportions and arches mirror those of St James’ Church opposite, another of Greenway’s contributions to the historic precinct of Macquarie Street.

Governor Lachlan Macquarie opened the Barracks in 1819 with a meal of beef, plum pudding and punch, but that was pretty much the end of the good life for the barracks’ inhabitants. Macquarie had the barracks built to end the comparatively independent existence enjoyed by the convict population and to bring them under stricter government supervision. At sunset, their working day done, convicts were to return to the barracks where they were housed in dormitories of between 35 and 80 men. Up to 600 could be pressed within its walls.

The World Heritage site has been closed for the past year for a $20m refurbishment. When it reopens this month it will feature a new interactive tour that aims to bring to life the experience of convicts in colonial Sydney.

Beth Hise, head of content at Sydney Living Museums, says the barracks was built to maximise the colony’s use of convict labour as Macquarie embarked on a program of civic improvements, and also to put an end to convicts’ relative freedom in Sydney Town.

“Convicts in government service were finding their own accom­modation, living in The Rocks or renting rooms or ­houses,” she says. “They were negotiating time to earn their own money after their work for the week was done.

“Macquarie wanted them working from sunrise to sunset for the government because he had ideas about the mark he wanted to make on Sydney.”

The interactive audio tour involves a specially recorded soundscape in which “convicts” and others describe their voyage to Sydney, life in the colony and conditions in the barracks. Writer David McFetridge has drawn on convict records and other accounts to give voice to four characters involved in the story of early Sydney.

Charles Allen was 16 when he was found guilty of mail theft at the Old Bailey in London. Sentenced to death, he had his punishment reduced to transpor­tation for life in NSW. His story is representative of the convict settlers, many of whom were single men under the age of 25.

Sydney actor Christopher Stalley has lent his voice to Allen and begins the tale with the boy’s conviction and sentencing, and then his 140-day journey on board the Baring to Sydney. A sample of his story can be heard in the clip above.

“The way he describes it, he did a stupid thing,” Stalley says. “He had a fate that he considered worse than death, which was being exiled to the colony. The fun part for an actor is that there are so many things going on in his mind: he’s a 16-year-old kid, he’s terrified, he’s excited, there are storms along the way, and the shipmates and crew warning him what to expect.

“Once he gets here, he’s as surprised as anyone at what he finds. He’s educated, and he’s able to find work quite quickly as a clerk — he went to work for one of the wealthy businessmen in Sydney.”

Charles arrived in Sydney before the barracks was constructed and he never was incarcerated there. After he had been in the colony for a few years he disappears from the record: possibly he had received a pardon. “I always imagined, when I think of the convicts, that people had to work hard and were getting whipped,” Stalley says. “But what we know about Charles Allen is that after about three years he was able to get a pardon, after which he disappears from the record.”

Historians and writer McFetridge have drawn on convicts’ records but also have taken some artistic licence to make the stories engaging while also being true to the period.

“We want the listener experience to be informative and intimate,” Stalley adds. “It will be like taking visitors by the hand and guiding them through, and keeping that level of intimacy.”

The story is then taken up by another convict, Joe Smith. He was a skilled craftsman and was put to work in the Sydney brickworks, making bricks for the barracks that, eventually, he’d be forced to live in.

After 1848 the barracks was no longer used to house convicts and in 1862 it became the Hyde Park Asylum, a refuge for homeless and destitute women. The barracks also was used as temporary accommodation for unaccomp­anied women who had newly arrived in the colony. In the audio tour, actresses lend their ­voices to an Irish immigrant, Margaret, and to Lucy Hicks, who was matron of the barracks for 25 years.

“The women had nowhere to stay,” Hise says. “They were getting off the ship and sleeping on the street. The government realised they needed to do something and repurposed the bar­racks as an immigration depot.”

Visitors to the revamped barracks will be able to climb to the top floor of the building and see where the convicts slept in rows of hammocks, watched by guards who could spy on the inmates through peepholes in the walls. The $20m refurbishment program includes new amenities such as a learning precinct, improved accessibility, and a fresh face for the clock on the barracks’ western facade.

When the site reopens this month it will include an installation by Jonathan Jones, in which red and white gravel depicts symbols of incarceration and of indigenous Australia — the broad arrows of convicts’ uniforms and emu footprints.

The artwork is temporary, as the images will gradually disappear as people walk over the gravel. Part of Sydney’s Art & About program, the artwork has been supported by four donors including Sydney Living Museums trustee Penelope Seidler.

The audio guide is triggered by geolocation technology, meaning that visitors can walk “eyes up” through the barracks and the narrative will play automatically. It is expected to be a popular feature of the newly restored barracks. Sydney Living Museums has a target to increase visitation by 50 per cent across its 12 sites and facilities, including the Museum of Sydney, Elizabeth Bay House and Rose Seidler House.

“This is an iconic building and one of our more successful properties,” Hise says. “This kind of experience is at the forefront of museum-making internationally, bringing that sense of history to the visitor in a very visceral way. It enables people to feel the story, and realise that they have absorbed a lot of history without feeling that they’ve been in a classroom.”