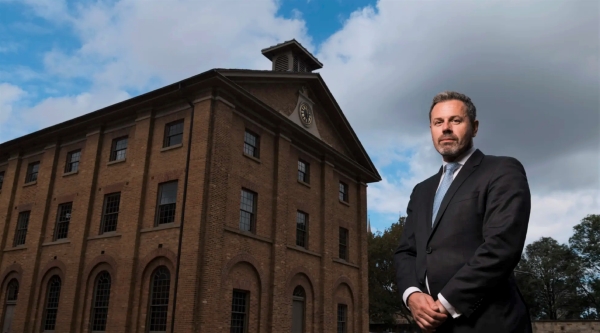 Mark Goggin, Sydney Living Museums executive director, outside the Hyde Park Barracks. New renovations will be funded by the sale of the air rights above the building to Sydney developers. Credit: James Brickwood.

The 200-year-old Hyde Park Barracks is raising nearly $20 million towards its future conservation by selling its air rights – or unused development space above the building – to private developers for use elsewhere in the city.

It is the first time in Australia that a UNESCO-listed building has sold its air rights, and the second government building in Sydney to do so.

The air rights were sold to three different developers, including Lendlease, with the price ranging from $1460-$1610 per sqm, for developments in other parts of central Sydney.

Under City of Sydney planning regulations developers can purchase heritage floor space from registered buildings like the Barracks in order to gain approval to supplement their existing floor space. The space above the existing building will never be developed.

The sale of the air rights was generating “blue sky” revenue, said Mr Goggin, now and into the future with potential for the rights to be sold every 25 years.

The money will fund the conservation of the Francis Greenway designed building which received UNESCO world heritage listing with 10 other Australian convict places and institutions, including Port Arthur, in 2010.

UNESCO said these sites told the “an epic tale of Australia’s convict beginnings” and the extraordinary range of systems and conditions experienced by the 166,000 convicts who were transported to the colonies between 1788 and 1868.

Mr Goggin said it would also allow Sydney Living Museums to invest in an improved, interactive and immersive visitors’ experience at the Barracks. The Barracks are currently closed for a revamp, and will reopen in December to mark its bicentenary.

The very modern funding deal coincides with the 200th anniversary today of Governor Lachlan Macquarie’s announcement of the first living arrangements for the newly completed barracks.

Announcing his decision in The Sydney Gazette on Saturday, May 1, 1819, Governor Macquarie said convicts had previously been able to work some of the day for their own benefits.

This enabled them “by honest industry to provide the means of paying for the lodgings, the washing and mending of their clothes”.

While this “indulgence” might have been expedient at the time, the rapid increase in the population had rendered it in “some degree the source of many evils”.

That had led to the decision to require convicts to work exclusively for the government from sunrise to sunset. In exchange, male convicts were to receive full bed and board, including fruit and vegetables and 1.5 pounds of meat and 1.5 pounds of flour a day. The first 100 of 600 men and boys who would be housed there were told to prepare to move to the barracks on May 5.

Mr Goggin promised the new visitor experience, costing an estimated $18 million, would do some “myth busting” about the convict experience. “Here is an opportunity to completely refresh the [previous] interpretation and provide a more holistic, chronological narrative of the convict transportation system.”