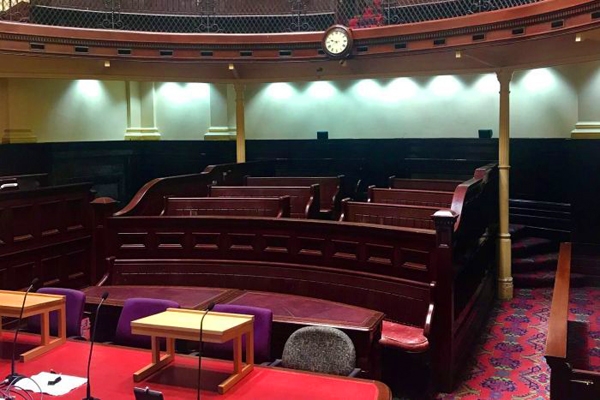 Some of Sydney’s most interesting buildings, like the Supreme Court, will be open for unprecedented access by the public as part of the Sydney Open event. ABC News: Mazoe Ford.

Mazoe Ford, Sydney Open: City’s most interesting and unique buildings to be toured by the public for one day only, ABC News, 21 October 2017

From heritage-listed buildings to modern skyscrapers, Sydney has an eclectic mix of architecture that in our busy day-to-day lives, we rarely get a chance to appreciate.

For one day only, around 50 of Sydney’s buildings that are normally off-limits to the public will open their doors to tours for the curious public.

The rare access is for Sydney Open, a ticketed event on November 5 that invites people to take a behind-the-scenes look at some of the city’s most historic and interesting architecture.

Mark Goggin from Sydney Living Museums said it will be a great chance for Sydneysiders to take a closer look at buildings they often rush past.

“It’s an opportunity to get into those cultural, commercial and heritage spaces that you haven’t been in and see Sydney in a new light.”

Step into the witness box

One of the major drawcards for the 2017 event is the King Street Supreme Court Complex, which was built in stages throughout the 1800s.

While members of the public can sit in on most court proceedings any day of the week, for Sydney Open there will be unprecedented access to explore the historic complex.

Ticketholders will be able to stand at the bar table, sit in the jury box, step into the witness box, and even sit in the dock where some of the state’s worst criminals have sat during their trials.

Nick Sanderson-Gough, the operations manager of the complex, said you can feel the history as you walk through the building.

“From an architectural point of view there are lots of things that will probably catch people’s surprise and attention, but I think it’s that combined with the weight of what’s gone on in here that makes it interesting,” he said.

“Also, having that unrestricted access for Sydney Open means people can just walk around and there’ll be people here to talk to them about some of the history and some of the stories, so I think that be a really interesting experience for them.”