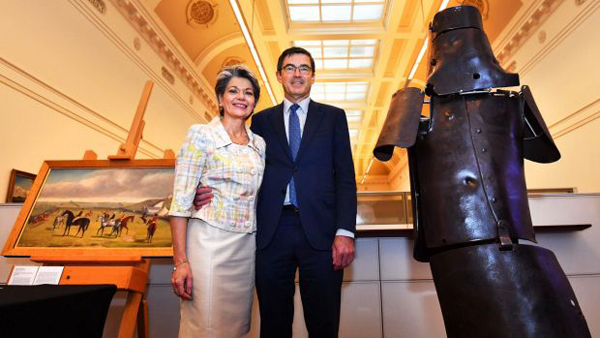 Premier Daniel Andrews has lauded a philanthropist couple’s $8 million donation to the State Library of Victoria as an extraordinary gift to the public.

The endowment, made by investment banker and library chairman John Wylie and his wife, French consul Myriam​ Boisbouvier-Wylie, is one of the biggest in the library’s 160-year history.

It will fund a new exhibition space, The Victoria Gallery, which will focus on the history of the state.

The state government announced a $5 million contribution to the redevelopment of the library’s eastern end. The project will include reopening the Russell Street entrance for the first time in 14 years, as well as a new cafe, retail and a collaborative working space. A La Trobe Street entry will also be created.

Mr Andrews said that for too long library treasures had had to stay hidden in storage. “The Victoria Gallery will help bring to life the State Library’s many collections, drawing locals and tourists alike to one of our most treasured institutions,” he said.

“I welcome the generosity of the John and Myriam Wylie Foundation; it is an extraordinary gift to the people of Victoria.”

Mr Wylie said the 500-square-metre gallery – on the site of a presently restricted-access manuscripts section on the second floor – would enable more items to go on display.

Among those items are the 5000-signature 1853 gold miners’ petition, art by Aboriginal elder William Barak, and first-hand accounts of the Eureka Stockade.