You are here: Home » Articles filed under: 'News' » Article: 'SMH’s Explainer on the boom in fossils'

SMH’s Explainer on the boom in fossils 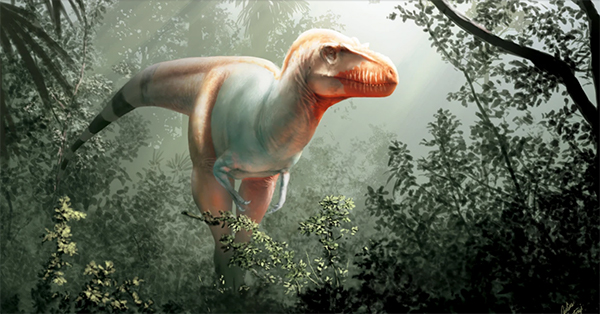 An artist’s reconstruction of thanatotheristes or the Reaper of Death, discovered this year. Credit: Julius Csotonyi.

Sherryn Groch, ‘We’re not running out of dinosaurs’: Why is there a boom in fossils?, The Sydney Morning Herald, 5 March 2020

More than 20 years since Jurassic Park roared onto screens, interest in dinosaurs is not going out of fashion. What is Australia’s dinosaur history? And what more is there to discover?

Jack Horner, the palaeontologist who inspired the movie juggernaut Jurassic Park, found his first dinosaur bone when he was just eight. His father had seen something sticking out of the earth as he rode across the prairies of Montana, North America, long the heartland of dinosaur discovery, and it was there that he took little Jack fossil hunting. The bone still sits in Horner’s office today.

The success of Jurassic Park in 1993 would launch a new generation of palaeontologists and an unprecedented boom for the field, opening up frontiers from Argentina to Australia and rewriting the story of the scaly monsters on screen. Within three years, on a hillside in China, a farmer had stumbled upon the world’s first glimpse of a feathered dinosaur.

Today, close to one new dinosaur species is discovered every week. This year the big find to hit headlines is a new species, and likely a new genus, of tyrannosaur exhumed from the dust of Alberta, Canada, pictured above.

Far from the image of the lumbering lizard doomed to extinction, palaeontologists now know dinosaurs as nature’s great success stories. In their 185-million-year reign on Earth, they weathered tremendous upheaval. Continents broke apart, volcanoes rained lava, temperatures and toxic gases climbed, monster wildfires scarred the land. Still dinosaurs spread to all its corners, growing to the size of passenger planes or emerging in strange new shapes including, eventually, as birds.

In South America and Asia, whole new ecosystems are being unearthed, from huge spiked herbivores to strange bat-winged “vampires”. In outback Australia, a literal treasure trove of fossils has been found down an opal mine, many species preserved as vibrant gems.

Now in another era of planetary change (this time of our own making), and with news from NASA that an asteroid nearly the size of the one that took out the dinosaurs 66 million years ago will soon sail hair-raisingly close to the Earth – what can we learn from these creatures? How has palaeontology evolved since Jurassic Park? What discoveries have put Australia on the map? And will we ever bring a dinosaur back to life?

Why are scientists still finding so many dinosaurs?

Horner sat next to director Steven Spielberg as a consultant on the set of Jurassic Park, and remembers well the hordes of students who suddenly signed up for his university classes after the film hit cinemas. But it wasn’t a flash in the pan, says palaeontologist and author Steve Brusatte, who has himself helped discover somewhere in the order of 15 to 20 new dinosaurs.

The students kept coming and today the resulting gold rush of discovery shows no signs of slowing down. “We’re not running out of dinosaurs,” Brusatte laughs.

Palaeontologist Alfio Alessandro Chiarenza has tracked the rate of new finds since the first bones were unearthed in the 1800s, including that sudden surge. He too belongs to the Jurassic Park generation, the scientists “who never grew up”, but says better technology is also speeding up dinosaur hunting as they compare finds online.

Out in the field, Horner says the tools are still mostly what they were when he started. Dinosaur bones eventually become rock (and in some places, such as Australia, gem stone), which makes them nearly impossible to pick out from the landscape with scanners. Yet, back in the lab, X-rays, 3D printing, even molecular particle accelerators now come into play. “And we can send drones out for us now to take pictures,” Horner says.

The boom in dinosaur finds that followed Jurassic Park 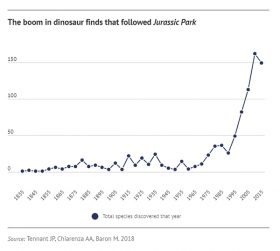 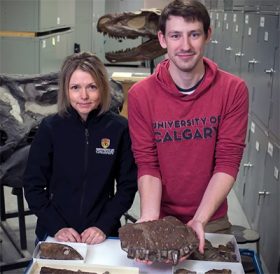 Darla Zelenitsky and Jared Voris with the bones he dusted off and identified as a new genus of dinosaur known as the Reaper of Death. Credit: Royal Tyrrell Museum.

All of those fresh eyes in the field can sometimes catch what has been missed. This year’s new tyrannosaur on the block gathered dust in a museum cabinet for almost a decade before PhD student Jared Voris decided to take a closer look. Now dubbed the Reaper of Death, the tyrannosaur is the oldest found in Canada. In life, it would have been about the length of two cars.

“We’re confident it’s a new genus as well as a new species,” Voris says. “The ridges in the jaw and the [shape of] the cheekbones are really different.”

But sometimes, Horner warns, the hype can get ahead of the science. Many dinosaurs vary wildly in size and shape over their life cycle and baby dinosaurs have on occasion been “discovered” as their own separate species.

How do fossils form?

To survive the tens of millions of years between death and discovery, dinosaur remains need cover from the elements. Most will decay completely but sometimes the conditions are just right for preservation – usually when an animal dies near water and is buried under sediment such as mud or silt. Water infused with minerals will seep into the hard, longer-wearing parts, the bones or teeth, as they break down, gradually replacing and encasing them. Over millennia, they are compressed into rock or “fossil”. Sometimes other substances such as tar or ice can do an even better job of preserving the original remains, leading to remarkable discoveries such as intact feathers or even soft tissue.