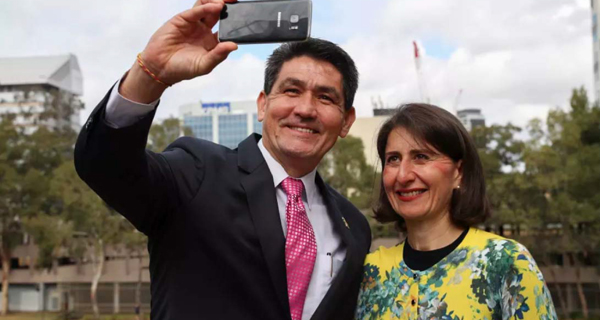 The member for Parramatta, Geoff Lee, takes a selfie with NSW Premier Gladys Berejiklian at an announcement of the site of the Powerhouse Museum in Parramatta on Saturday. Photo: Cole Bennetts.

The overall cost of building, operating and moving the Powerhouse Museum to western Sydney will top $1 billion, the government’s own economic analysis states, as the fate of the Ultimo site continues to remain uncertain.

Outlining the government’s plans for a new dedicated museum with a domed planetarium and an exhibition space for travelling international blockbusters, the NSW Minister for Arts, Don Harwin, said there were no plans to demolish the heritage-listed buildings of the Museum of Applied Arts and Science’s inner-city museum.

But he did not rule out the sale of airspace rights nor partial sale and residential redevelopment on the 2.6-hectare site along Harris Street. A masterplan had yet to be started and a final business case was still to be completed setting out the government’s financial investment options at Ultimo.

Once the building is decommissioned at the end of 2019, Mr Harwin said he supported the development of a creative industries precinct similar to New York’s Meatpacking District with a lyric theatre and a design and fashion museum. It is believed the Powerhouse Museum’s Boiler and Turbine Halls have been appraised for conversion into commercially tenanted performance spaces.

A lyric theatre could also be built in the halls or as a requirement of residential redevelopment for the Hardwood Building where the bulk of the museum’s 500,000 plus item collection is housed.

Defending the lack of firm detail around the Ultimo site, Mr Harwin said he had received a number of approaches from creatives keen to be involved in planning for the new cultural precinct in Ultimo and wanted to get the best outcome for the state.

“They are genuinely worried that priceless artefacts, including the world’s only working Boulton and Watts Steam Engine, will be irreparably damaged during the move.

“They believe other exhibitions will be locked away from easy public access. They love this institution, they see its value every day, and they cannot believe this government is seriously shutting it down.

Museum of Applied Arts and Science director Dolla Merrillees thought her staff would be “extraordinarily excited” at the opportunity.

“I can safely say for my institutional counterparts being given that opportunity to do a 21st-century museum that is purpose-built and iconic and showcase our collections is what we are all about.

“Museums at the end of the day serve their communities and I think with the expertise and extraordinary professional skills of our staff, we’re the team to do it.”

The government has put the “net cost” of the museum move at $645 million, once revenue sources are taken into account, but, according to the business case summary, the costs of land purchase and moving operations, including wages, is estimated to be $1.179 billion.

With the project’s benefits about $1.2 billion, this gives the project a cost-benefit ratio of 1:02.

The business case was prepared by the Cultural Infrastructure Program Management Office and started with the decision by former NSW premier Mike Baird in 2015 that the existing Powerhouse Museum should be decommissioned and its collection moved to Parramatta to rectify cultural funding inequity in western Sydney.

The analysis considered three options at Parramatta, two of which had a benefit-cost ratio above one, the point of which a project is deemed to have more value than cost.

The biggest risks to the project were deemed to be the need to shift the MAAS’ collections from Ultimo to the museum’s new riverside location.

Consultants Taylor Thomson White identified measures to mitigate potential flood risks for inclusion in the project’s eventual architectural and structural design, and that had been factored into the cost estimates.

Although Option 3 had greater construction costs with a planetarium and large amounts of exhibition and education spaces, it was deemed to have greater functionality and draw the greatest visitor numbers.