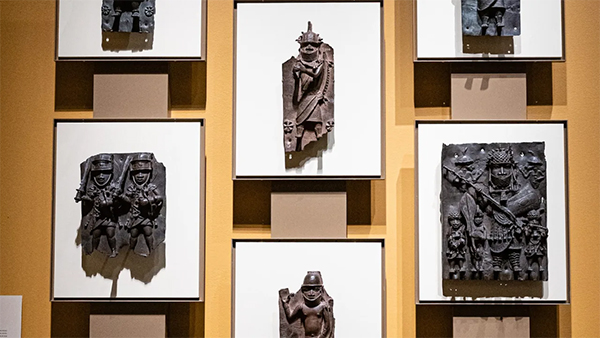 On October 11, 2022, the Smithsonian’s National Museum of African Art hosted a repatriation ceremony in which officials of the museum transferred ownership of twenty-nine Benin bronzes and the National Gallery of Art transferred ownership of one to representatives of Nigeria’s National Commission for Museums and Monuments. Below are the remarks delivered at the ceremony by Lonnie Bunch III, the 14th Secretary of the Smithsonian Institution, and Kaywin Feldman, Director of the National Gallery of Art. Read more about the repatriation from The Washington Post.

Ngaire [Blankenberg, Director of the Smithsonian National Museum of American Art], thank you for your kind words but especially your leadership as we navigated this process.

1897. 125 years is a long time to wait for justice, to wait for fairness, and to wait for an ethically driven return of the ownership to the Nigerian government of such beautiful and important artifacts. I have been moved by a recent report which suggested that 90 percent of African material in museums is located in institutions outside of Africa. Within this context, the Smithsonian Institution is honored and humbled to play a small, corrective part in helping to bring long-delayed justice and visibility to this issue.

The Smithsonian believes that museums are the shared stewards of collections, not simply owners. We are not simply scholars and curators who impart knowledge, but institutions who are made better when we know, learn from, and collaborate with living communities. That shared stewardship enriches our understandings and allows us to better serve our diverse audiences. I am convinced that it is more important than ever that cultural institutions make ethical considerations central to everything we do, from hiring to interpretation to collecting. Though the Smithsonian has long been a leader when it comes to the repatriation of native cultural heritage, until now, the Smithsonian has never established an institution-wide ethical returns policy.

When I look at the Benin Bronzes, I am initially struck by their beauty and the skills needed to create such art, but I am also taken by how much cultural meaning and memory is embedded in these objects. They are ripe with memories that need to be shared with the living community.

So today, we right a wrong. Today we recognize that museums should model the behavior and the expectations that will help make the world a place of beauty and of fairness. So today, we use this moment to address a historic injustice by returning the magnificent examples of Benin’s culture and history.

Good morning, everyone. The National Gallery of Art is honored to join with the Smithsonian Institution and Rhode Island School of Design Museum [RISD] in this historic moment, as the first American institutions to return Benin Bronzes stolen 125 years ago from their place of origin. We are pleased to work with the Nigerian National Commission for Museums and Monuments to repatriate this sculpture and to return the work where it belongs—with the people of Nigeria.

I would like to express my sincere gratitude to director general Professor Abba Issa Tijani and the honorable Minister Lai Mohammed for their partnership in organizing the ethical return of the sculpture. It is an honor to have His Royal Highness, Prince Aghatise Erediauwa, and Deputy Chief of Mission Mukhtar Bashir here with us to mark this momentous day. And I would like to thank Secretary Bunch, Director Blankenberg, and their Smithsonian colleagues for their collaboration in organizing this ceremony. We are glad to have Sarah Glanz Blythe, Interim Director of the RISD Museum, here with us this morning, as well as Gina Borromeo, Head Curator and Curator of Ancient Art for RISD Museum, and Crystal Williams, President of the Rhode Island School of Design.

When I joined the profession thirty-five years ago, the collecting philosophy of American art museums was “do whatever it takes to get a great object.” Directors and curators were judged for their prowess in looking the other way, and we rarely interrogated provenance. I am happy to say that the world of museum collecting has changed profoundly over the last fifteen years, producing new ethical collecting guidelines for museums. I am proud to be a part of this profession and a member and former chair of the Association of Art Museum Directors and the American Alliance of Museums—organizations that have helped to lead the field in a more ethical approach to museum collections.

The credit for the move to restitute Benin bronzes from American collections belongs to the students of RISD, who called on the museum to repatriate the Benin sculpture of the head of an Oba from their collection back in 2017. And when I joined the National Gallery in 2019, it was a postgraduate student in the Gallery’s Center for Advanced Study of the Visual Arts who alerted me to the Benin Bronze in the Gallery’s collection, asking me point blank to return it. I applaud this generation of scholars and emerging professionals who demand a higher bar for museums.

For years the National Gallery’s curators and researchers have worked to learn more about the Benin sculpture in our collection and its provenance. We came to understand that the work had been stolen from the Royal Palace of Benin in 1897, subsequently sold at an auction in London in 1954, and later given to the National Gallery in 1955. In the decades since, the work was displayed, researched, and lent several times for display here at the National Museum of African Art. Detailed evidence shows that the Fowl, as the sculpture is known, was removed in a violent act of colonial conquest from the Kingdom of Benin as a result of the destruction of Benin City in an attack now known as the 1897 British Punitive Expedition.

With that evidence, the case for the repatriation of the sculpture was clear. The National Gallery’s Board of Trustees approved the deaccession in May of 2020 and the Gallery began the process of restitution immediately afterwards. And now, at last, we are pleased to transfer ownership of the Fowl to its place of origin—Nigeria, 125 years after it was stolen.

We are honored to work with our partners from Nigeria here today to bring this work home. This is just the beginning of a relationship that we will continue beyond this historic day. My colleagues at the National Gallery look forward to working with and learning from our colleagues in Nigeria for years to come. Thank you.

See also: Smithsonian gives back 29 Benin bronzes to Nigeria: ‘We are not owners’