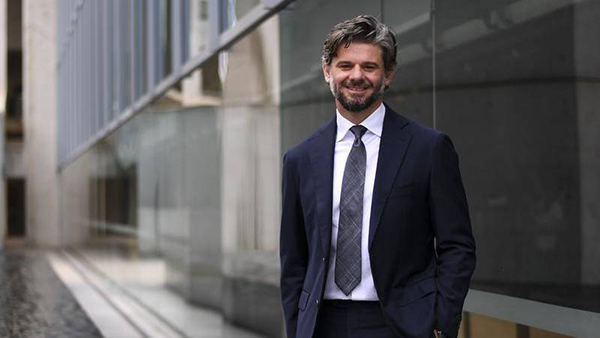 Nick Mitzevich, director of the National Gallery of Australia.

The number of visitors to the National Galley of Australia in Canberra has been cut by 50 per cent since thick smoke descended on the city.

NGA director Nick Mitzevich said two days of closure because of smoke and the on-going effect of the continuing pall over the city had hit attendance.

On New Year’s Day, when the smoke was particularly bad, visitors were greeted by a sign saying: “Due to an increase in smoke/power outages in the Canberra area, the National Gallery of Australia will be closed today. Closing our doors allows us to mitigate any risk to the public, staff and works of art on display.”

Visitors turned up saying they had planned an arts weekend in Canberra. They then turned and left the gallery and its closed doors behind them. 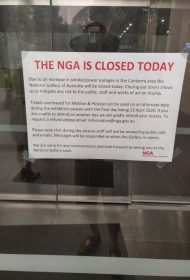 The gallery was treating the smoke and its dampening effect on visitor numbers as what Mr Mitzevich called a “localised event” rather than a permanent change. “There’s been an incident and it’s having an effect on us,” he said.

“This is not a trend or a pattern and I know confidently that when we have blue skies, people who have put off travel will be here.”

The gallery currently has two big exhibitions with masterpieces loaned by other galleries, some of them in Europe and North America. Mr Mitzevich said he had been in touch with those galleries and the lenders of works had been “kept in the loop”.

“They’ve entrusted their work with us and they know that we have been proactive,” he said. There had been no special treatment for lent works compared with those the gallery owned itself. The gallery’s standards were as high as any gallery’s.

The NGA’s collection is valued at $6 billion though, in truth, nobody knows what the monetary value would be because the works are unique and not for auction.

It has some iconic paintings by Australian artists – works by John Glover, Arthur Streeton and Tom Roberts. Perhaps the biggest attractions, though – 25 paintings by Sidney Nolan depicting Ned Kelly – are away on tour and so didn’t need protection.

“Smoke is suspended airborne particles,” Mr Mitzevich said. Those particles could corrode the surface of pictures, particularly when the paintings were on paper rather than canvas covered with glass. “Anything in the air that is a foreign body has the potential to deteriorate artworks over time.”

Of the two special exhibitions, one – of paintings by Hugh Ramsay – is free so there was no loss of revenue from the two days of closure and subsequent slump in visitor numbers.

The other is of works by Matisse and Picasso, many of which would fetch many millions on the market.

Tickets for an adult to the exhibition cost $28. The gallery director was confident that revenues would not be seriously hit despite the two days of closure and the lower visitor numbers since because the exhibition lasts until April and the reviews have been good.

On one day, the NGA closed when the National Portrait Gallery on the other side of the road remained open.

Mr Mitzevich said this discrepancy was because the portrait gallery’s air-control system was better at dealing with smoke.

In contrast, the NGA building is older and it’s in three different sections, each needing different control of the air. The portrait gallery has also just been renovated, with up-to-the minute air filtering.