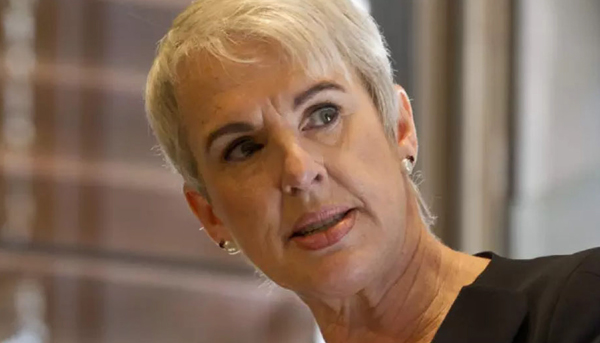 Businesswoman Diane Smith-Gander called on the Premier to “point out the inappropriateness” of Alan Jones’ behaviour. Credit: Louie Douvis.

Prominent businesswoman Diane Smith-Gander has slammed broadcaster Alan Jones over his on-air treatment of Sydney Opera House chief Louise Herron, saying that men bullying women is “worse than any other sort of bullying”.

Ms Smith-Gander, the immediate past president of Chief Executive Women and a board member of Wesfarmers and AGL, said Jones’ very public attack on Ms Herron on Friday had been “startling” and failed to recognise the broader impact of that kind of “role modelling”.

She called on NSW Premier Gladys Berejiklian to “point out the inappropriateness” of Jones’ behaviour.

The Premier alluded to the controversy on Sunday by saying it “wouldn’t be Sydney” without people expressing different views, and that while everyone had that right, “views need to to be expressed respectfully”.

Ms Smith-Gander said Jones had “achieved on so many fronts” and was “clearly a person of great intellect, he has … achieved in the sporting arena as a coach and administrator and he has achieved in the corporate arena”.

But she added, “This is someone incredibly influential, highly skilled, who should be able to control themselves very effectively and should not step over the line.”

“So I find it startling that first, he can’t control himself and second, that there is no consequence [for him] of that lack of control. And third, that there is so limited an understanding of the impact that that [kind of] role modelling has in areas like domestic violence and general lack of respect for women.

“One instance of [stepping over the line] should be enough to completely destroy a career and see him have to lose his position” she told Fairfax Media.

Mr Jones unleashed on Ms Herron on Sydney radio station 2GB  on Friday when she resisted his and the racing industry’s demand that the Opera House sails be used to advertise next Saturday’s Everest horse race, Australia’s richest with a $10 million prize.

Jones threatened to immediately ring NSW Premier Gladys Berejiklian to get Ms Herron sacked unless she changed her position. 2GB is owned by Macquarie Media, which is majority owned by Fairfax Media.

“For her to find herself in a position where her government masters are seemingly dictated to by someone who has not been elected – that is also startling to me. Who knows what went on behind the scenes, but that is the appearance.

“Alan Jones’ power and influence crosses the political divide and nothing less than universal rejection of his behaviour by our politicians will satisfy me.”

Ms Berejiklian denied that the government’s decision to over-rule Ms Herron was because of Jones. She told reporters “this decision was at the back end of weeks and weeks of negotiation … What we have arrived at is a compromise. ”

“Why choose to do this, to our iconic national asset, in support of the gaming industry? And for a silly horse race called the Everest which is a name which has no connection to Australia. If they were running this race in Northern India, well maybe. Couldn’t they have found a better name? It’s so incongruous on so many levels.”

She added that many Australians were becoming concerned at the impact of problem gambling on families and children.

On Sunday Ms Berejikilian said the race was “important” to Sydney, but Ms Smith-Gander said “I don’t think Sydney lives or dies by a horse race”.

A number of prominent women in corporate Sydney have expressed their disgust on Twitter at Jones’ conduct. They include Chair of Carnival Australia, Ann Sherry, and Suncorp’s Pip Marlow.

“Alan Jones specialises in trying to demean and bully. The SOH is NOT a billboard,” Ms Sherry wrote.