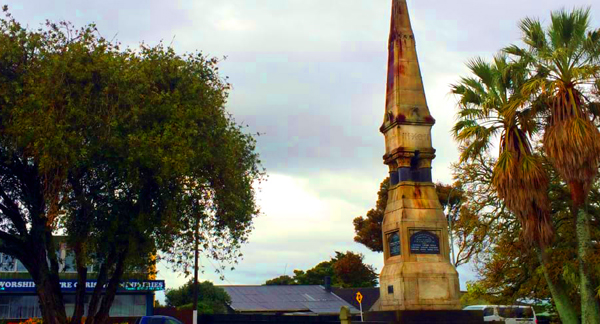 On a triangle of reserve in Ōtāhuhu stands a memorial to Colonel Marmaduke George Nixon. It has been there since 1868. Now, like other statues around the world, there are calls to remove it.

Te Pou told RNZ: “It should not be standing in memory of who I think was a thug.”

Nixon’s legacy is a bloody one, which historians say involved the killing of Māori women.

During the Waikato War Nixon led his militia forces in an attack on the largely unfortified and undefended Rangiaowhia settlement.

The attack was unexpected. Nixon’s and British forces had bypassed a defence line in the dead of night to reach the agricultural settlement, responsible for supplying food to Māori warriors.

Only elderly warriors, women and children were at Rangiaowhia when Nixon arrived. They ran for cover to churches and whare. The battle focused on a whare Māori were shooting from.

“An elderly man came out with a white blanket raised above his head. Clearly unarmed, he was killed by a hail of bullets despite an officer’s order to ‘spare him’,” the NZ History site says.

The whare caught fire and the bodies of seven were found in its charred ruins. Two of the deceased were women.

Nixon was shot in the chest during the battle. He did not recover from the wound and died three months later. Public anger at those responsible for his death culminated in the proposal to erect a memorial in his honour.

A plaque on the memorial reads:

“To the memory of Marmaduke George Nixon M.H.R. Colonel commanding the colonial defence force and royal cavalry volunteers who fell mortally wounded in action at Rangiawhia.”

The Māori who died are not mentioned. 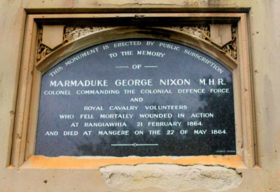 Te Pou’s petition says: “It’s a travesty that such a one-sided account of a tragic historical episode is given literal stature.”

The current debate around statues, sparked by the events in Charlottesville in the US, gives New Zealand an opportunity to revisit our own troubled past he says.

University of Auckland Associate Professor of Pacific Studies, Damon Salesa, said Te Pou’s call to relocate it is reasonable but there are other options which could be considered.

“That includes putting other statues alongside or just finding a place of rest for them that doesn’t allow them to speak and capture the public memory.”

Removing statues and memorials to people considered “repugnant to some people” is not always the best way to redress history Salesa said.

“One of the grave dangers is by removing statues you can actually limit or whitewash history in a different way. The most important thing is to make sure the interpretation of those statues is robust. That the monuments don’t simply speak for themselves, because they never do, but are put in a proper context, which is often critical or very different to the statues themselves.”

Relocation of the memorial would raise an issue of what to do with Nixon’s remains.

In 1968 his remains were transferred from the Symonds Street Cemetery when areas were removed for a motorway development. They now sit at the base of the obelisk.

“The fact that his remains were moved there after the statue was made mean that we have to be respectful to his remains as well but that doesn’t mean we have to leave the statue undisturbed, or speaking for itself or making a claim about the past which frankly is not reasonable, objective or balanced,” said Salesa.

Te Pou’s petition explains he is a Māori father and he believes New Zealand history should be told forthrightly and honestly to his children.

“To the question, ‘Why do we celebrate the life of men like Colonel Nixon who sought out war, and not those who seek peace?’, I cannot offer them a satisfactory answer.”

RNZ reported Phil Goff said if there is sentiment in the community that the other side of the story needs to be told, he is not opposed to it.