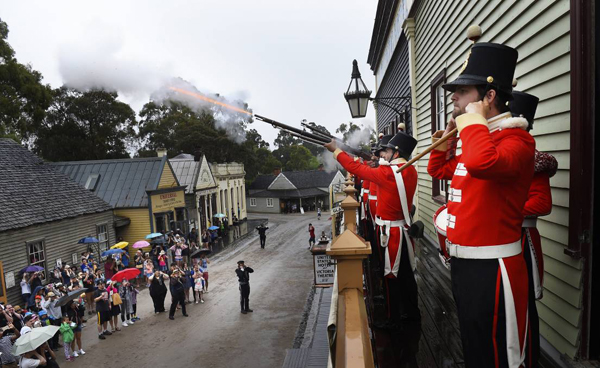 Hit by scammers: Sovereign Hill is one of at least nine Victorian victims of a Chinese ticketing scam, costing the attraction $15,000 across six months. Picture: Luka Kauzlaric.

Sovereign Hill is one of at least nine tourism attractions in Victoria which has fallen victim to a Chinese scam which has stripped more than $350,000 from the organisations.

The scam which operates through the Chinese social media platform WeChat produces a fake page for would-be tourists to buy tickets to the attractions at discounted rates.  From there an authentic ticket would be purchased with a stolen credit card.

Sovereign Hill chief executive Jeremy Johnson said Ballarat’s most popular tourist attraction had lost about $15,000 over six months from the scheme, with about 300 tourists purchasing the fraudulent tickets.

“When Sovereign Hill presents the ticket for payment at the bank it’s knocked back but a month of two later a visitor rocks up thinking they’ve bought a ticket,” Mr Johnson said.

“We’d get a suspicious looking online purchase with one credit card where they would purchase a number of tickets on separate occasions.”

The Victoria Tourism Industry Council recently convened a meeting with some of the state’s biggest tourism operators to better understand the scale of the scam, which has been affecting businesses across the country.

Mr Johnson said the attraction had implemented more rigorous testing of online purchases since noticing the scam last year and had not experienced a dodgy ticket in the past two months.

“You couldn’t know (where the scam originated) and more likely than not it’s operating in China but it could be coming from anywhere,” Mr Johnson said.

Other Victorian tourist attractions which have been hit by the scam are the Eureka SkyDeck, the Peninsula Hot Springs, Phillip Island Nature Parks and Global Ballooning.

Sydney Harbour Bridge Climb has been the hardest hit by the foreign scheme, reporting a loss of $100,000 in 2016.

“Clearly this is likely to be just the tip of the iceberg. I would imagine we are talking millions of dollars nationally,” Victorian Chamber of Commerce and Industry chief executive Mark Stone told Fairfax Media, who also leads the state’s tourism industry council and wants members affected by the scam to contact police.