CEO of Sovereign Hill, Jeremy Johnson, has been announced the winner of the ‘Outstanding Contribution by an Individual’ award at last night’s 2012 RACV Victorian Tourism Awards. At the gala awards ceremony, held at Crown Palladium in Melbourne, Mr. Johnson was presented the award for his continued dedication and passion for regional tourism in the goldfields area of Ballarat.

Johnson was acknowledged for his strategic thinking, highly successful work with the tourist market in China and endless commitment to developing Sovereign Hill, which draws nearly 700,000 visitors annually and was inducted into the Victorian Tourism Awards Hall of Fame in 2005. A member of senior management at Sovereign Hill since 1995, and CEO since 2002, Johnson was incredibly honoured to receive the award.

“’I feel humbled to be acknowledged with this award and looking back at previous recipients, I feel very honoured,” Mr. Johnson said.

The RACV Victorian Tourism Awards has fostered a culture of excellence and innovation for 29 years by providing a means of recognition amongst peers and encouraging consistent business development. Each year the awards bring together more than 1,000 stakeholders including key industry associations, operators, suppliers and state government stakeholders. 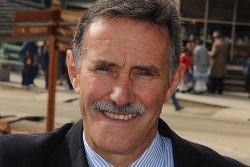 Jeremy Johnson, CEO Sovereign Hill. Photo: Sovereign Hill
Positions Vacant » View All
» Head of Aboriginal Heritage – MAGNT
» Enterprise Solutions Architect – MAAS
Latest News » View All
PNGNMAG, AM & Flinders Univ collaborate
to describe extinct PNG kangaroo Read more.
Frogs that lay eggs on land – new WA genus
named for teacher whose lab was a campervan Read more.
ICOM to discuss museum governance in Prague
& need for explicit cultural governance code? Read more.
The Hermitage Dir’s views on Ukraine war &
the museum’s role in exporting culture Read more.
Future proposed for Old QM Building (OMB)
via Qld Govt & QYO $20M donor pledge Read more.
Top +
Council of Australasian Museum Directors c/o Mr Brian Oldman, South Australian Museum PO Box 234 Adelaide, South Australia 5001 Australia, © CAMD 2022
Copyright: All information and resources provided on this website remain the copyright of the Council of Australasian Museum Directors. Permission is granted for viewing and downloading for personal and not for profit purposes. Those wishing to reproduce any materials for commercial, educational or other uses are requested to contact us.
Disclaimer: The content of this website is provided for information purposes only and is not intended as a substitute for professional advice. No claim is made as to the accuracy or authenticity of the content of the website. The Council of Australasian Museum Directors does not accept any liability to any person for the information or advice (or the use of such information or advice) which is provided on this website. The information on our website is provided on the basis that all persons accessing the site undertake responsibility for assessing the relevance and accuracy of its content. No responsibility is taken for any information or services which may appear on any linked web sites. Hostgator.
.