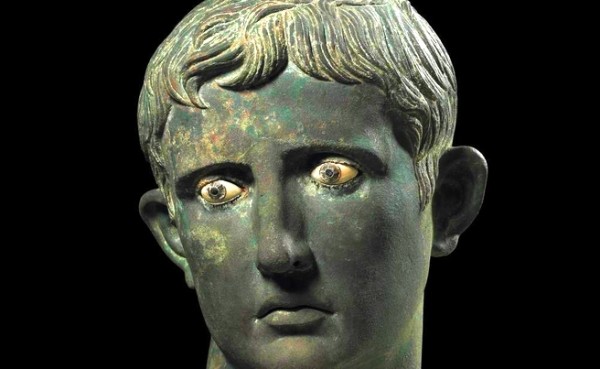 The eyes of Augustus stare out at us across the eons. The ruler of a great empire that spanned three continents is inscrutably present in our own time on the other side of the world.

Set in a head of bronze dated 27-25 BC, the Roman emperor’s powerful gaze of green-and-black glass is fixed permanently in silent reproach of those who cleaved it from its sculpted body more than 2000 years ago.

After he defeated Roman general Mark Antony and his lover Cleopatra at the Battle of Actium in 31BC Augustus ruled Egypt as the supreme leader of the Roman Republic.

He set up statues of himself to reinforce his power but in 25BC the Queen of the African kingdom of Kush invaded Egypt from the south and her army carried away this statue as plunder.

The Meroe Head, as this once potent figure of Roman authority is known, was excavated in 1910 in the ancient Kush royal city of Meroe in northern Sudan.

It had apparently been decapitated and buried beneath the steps of a temple, forever condemned to being trampled on by worshippers in symbolic defiance of Roman colonial power.

“The idea of forever treading on your enemy is an incredibly powerful statement,” says WA Museum head of archaeology and anthropology Moya Smith of the toppling of an idol which presaged the fate of statues of Lenin, Stalin, Saddam and other figures in our own time.

From next month, visitors to the WA Museum will come face to face with Augustus when one of the most important surviving portraits of the emperor comes to Australia for the first time in A History of the World in 100 Objects.

Spanning the past two million years of human history, from the oldest object in the British Museum’s collections to the present day, this is the third major international exhibition at the WA Museum under a special deal with the London institution.