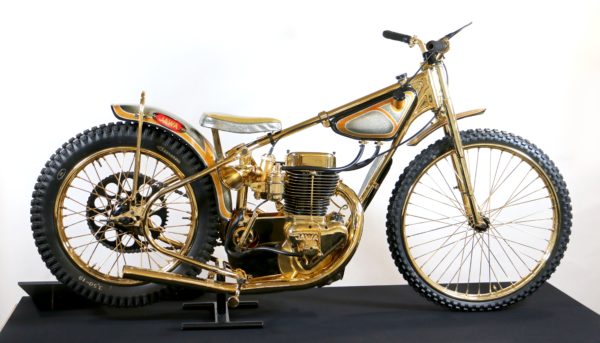 Canterbury Museum has purchased a significant collection of motorbikes and memorabilia belonging to the world’s greatest speedway rider, Ivan Mauger, thanks to the generosity of a retired Blenheim company secretary.

At $1.7 million (paid over three years), the purchase is the Museum’s largest-ever acquisition and the first funded by the Adson Trust. The Trust, administered by the Public Trust, was set up in 2010 with a $10 million posthumous donation from Arthur Henry Harrison, the largest gift received by the Museum in its 146-year history. Mr Harrison, a retired company secretary from Blenheim, specified that the money was to be used for additions to the Museum’s collections.

Julie Mauger, spokesperson for the Mauger family says they are thrilled to have secured arrangements for the collection to stay in Mauger’s “beloved home town” as a lasting public tribute to his achievements.

“Although he is now burdened with Alzheimer’s and cannot travel here himself, we know that this would have been one of the proudest days of dad’s life! We hope this collection, which charts his every success, will continue to inspire people, especially the young people of Canterbury that they can do great things from humble beginnings … and that being from Christchurch will always give you the edge!”

The collection has been on loan to the Museum since 2007, the same year that Christchurch granted Ivan Mauger the Freedom of the City. As well as Mauger’s gold-plated bike, the collection includes the bike he rode when he broke the world long track speed record in 1986 and the first Jawa 4-valve bike ever produced, on which he won the 1976 World Long Track Championship. It also includes trophies, vests, leathers and a variety of other objects.

To mark the acquisition the Museum has refreshed its Speedway King: The Ivan Mauger Story exhibit with all three bikes and his leathers again on display.

Museum Chairman, Michael McEvedy says “It’s fantastic that one person’s generosity has enabled the Museum to make such a significant purchase and to ensure that this marvellous collection which has so much meaning for Christchurch people, stays in the public domain.

“The family have generously agreed to sell the collection for much less than they might have received on the open market as there is a huge worldwide interest in the collection.”

Christchurch Mayor Lianne Dalziel said she was delighted that the collection would stay in the city for current and future generations. “Ivan Mauger is one of our most celebrated international sportsmen, but he never forgot where he came from and it’s fitting that this precious collection should stay in Christchurch where it all started.”

Ivan Mauger is considered the best speedway rider of all time. He won more than 1,000 international events in 60 countries and is still the only rider to win the World Speedway Championship in three consecutive years (1968, 1969 and 1970).

In 1970, two American speedway fans (George Wenn and Ray Bokelman) said that if Mauger won his third world title in a row at Wroclaw, Poland, they would have the winning bike gold-plated. They delivered on their promise; it took 18 months and cost US$500,000.

Ivan Mauger rode his first novice race on the track at Aranui Speedway, Christchurch in 1955, just four days after turning 16. His success as a rider, along with this ongoing support and encouragement of the next generation of riders, was recognised with an MBE in 1975 and an OBE in 1989. He was New Zealand Sportsman of the Year in 1977 and 1979.