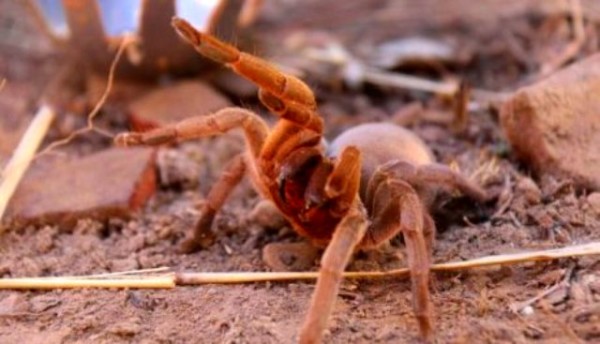 A female Maningrida diving tarantula shows its fangs after being dug up from its metre-deep burrow. Source: ABC News. Photo: James Oaten.

A floodplain near Maningrida thought to have the highest concentration of tarantulas in the world offers rare medicinal and economic opportunities, a spider expert says.

An estimated 25,000 diving tarantulas live along a 10 kilometre stretch of floodplain largely hidden from outsiders and deep within lands controlled by traditional Aboriginal owners.

The head of Queensland Museum‘s arachnological division, Dr Robert Raven, who has named more than 400 spiders in his 40-year career, believes the sheer number of tarantulas creates special opportunities for researchers seeking to unlock the spider’s secrets.

“There are probably more species of tarantulas in the Northern Territory than there are in any other single state,” Dr Raven said.

“Because there are so many, it’s not like we’re hunting or picking for a [particular] animal. They’re all around us.”

As scientists around the world investigate venom and its ability to create pharmaceutical drugs, Dr Raven believes the Maningrida diving tarantula could hold a medical miracle.

Dr Raven said any venomous creature that could infect a vertebrate had a “significant potential” to be a source of a valuable pharmaceutical that could benefit the entire community.