You are here: Home » Articles filed under: 'News' » Article: 'St Corona exhibition in Aachen (- but'

St Corona exhibition in Aachen (- but

The still uncleaned Leopold Corona shrine immediately after its removal from storage (all images courtesy of Domkapitel Aachen).

A German cathedral is polishing the shrine of Saint Corona for an upcoming exhibition, expecting “more interest due to the virus.” 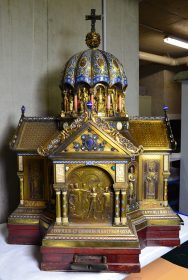 The still uncleaned Leopold Corona shrine immediately after its removal from storage (all images courtesy of Domkapitel Aachen). 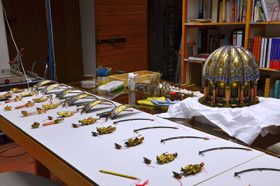 The dome of the shrine was neatly disassembled into its individual parts for cleaning purposes.

In Germany’s Aachen Cathedral, the relics of a particularly timely-sounding saint have emerged. The Christian martyr’s name? Remarkably, Saint Corona.

The cathedral had pulled a 216 lb embellished gold, bronze, and ivory shrine holding the relics from storage with the plans of flaunting it this summer, in an exhibition dedicated to gold craftsmanship. While the show’s opening date is now uncertain, a conservator is meticulously cleaning the shrine to ensure it is ready for public eyes once the pandemic is over.

“Corona” means “crown” in Latin, and all coronaviruses — not just the novel strain that causes COVID-19 — take their name from the crown-like spikes that surround each particle. It’s not surprising that in recent weeks, Saint Corona has, no pun intended, gone viral. And on social networks and the media alike, she has also been lauded as the patroness of plagues and epidemics, an attribution that is likely untrue. 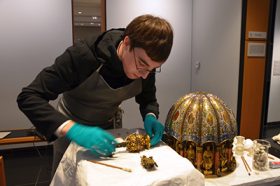 There is, in fact, a Saint Corona, who may have been killed as a teenager by the Romans in Syria for professing Christianity. But Candida Moss, a professor of theology at the University of Birmingham, told the National Catholic Reporter that she had never before been associated with epidemics. Those praying to Saint Corona should turn to Saint Edmund instead, patron of infectious diseases, Moss tweeted.

Still, some argue saints often acquire their patronage by accident or due to public consensus, making Saint Corona’s newly-minted title just as valid as any other. In any case, Aachen Cathedral hopes the shrine and relics will now garner increased attention once they can be exhibited. 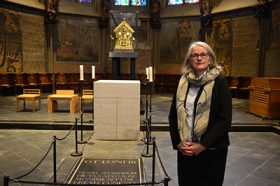 Dr. Birgitta Falk, head of the cathedral treasury, in front of the grave of Emperor Otto III, who brought the relics of Corona to Aachen in 997.

“We have brought the shrine out a bit earlier than planned and now we expect more interest due to the virus,” Aachen Cathedral spokeswoman Daniela Loevenich told Reuters.

According to the New York Times, Corona’s relics were brought to Aachen by King Otto III in 997. They were held in a tomb in the Roman Catholic cathedral, built by Emperor Charlemagne in 803 and one of Europe’s oldest, before they were stored in the elaborate shrine in the 20th century.