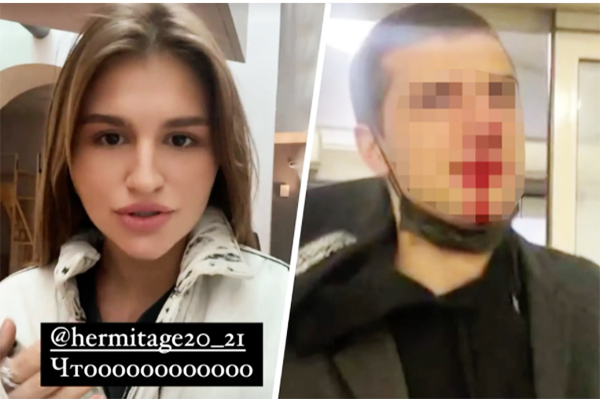 An employee of the State Hermitage museum in St Petersburg, Russia, has broken the nose of a prominent Russian Instagram influencer’s fan, live on the social media site. On 30 October, Anastasia Mironova posted an Instagram story to her more than 1.5 million followers moments after her companion, Nikolai Nikitin, was assaulted by a museum staff member.

Mironova’s Instagram stories showed Nikitin covered in blood from a facial wound in one of the atriums leading to the Hermitage’s historic collections. Nikitin had allegedly broken the museum’s Covid protocol by attempting to enter the museum through a designated exit.

The incident was the second social media scandal within days involving Russia’s most esteemed museum, and closely coincided with authorities cracking down on social media users for crimes including “insulting religious feelings”. Several young Russian Instagrammers are currently facing prolonged legal proceedings and potentially jail time after posting provocative images with religious landmarks in the background.

Mironova said Nikitin, who was accompanying her to the museum, had his nose broken when they paused near a doorway in order to access a QR code that proved that they had a Covid-19 vaccination or immunity—now a requirement for entry to the country’s museums—as Russia enters a new semi-lockdown phase due to a spike in cases.

“I am at the General Staff building of the Hermitage right now and an employee broke the nose of the person I was with. Is this normal?” Mironova asked her followers on Instagram after the assault.

Mironova added a video of the blooded young man alongside a copy of a doctor’s report saying he had suffered a broken nose. A number of commenters on her post claimed to have had their own bad encounters at the Hermitage.

“The employee who committed the offence fully admits his guilt and is sorry for his excessively emotional actions,” said the statement posted on the museum’s website. “He explains it by the general state of nervousness connected to the pandemic and its influence on life, including the museum’s new regime of work.”

It was initially reported that the employee was a museum guard, but news reports later identified him as Ilya Astrov, a research associate at the General Staff. Nikitin is the son of a prominent Russian business executive.

Two days earlier, the Hermitage reported that it has asked prosecutors to investigate an incident from 20 October for which a young man, Kirill Smorodin, has been accused of violating a new law on “publicly insulting defenders of the fatherland”. Smorodin affixed his own stylised portrait to the museum’s gallery of heroes of the 1812 war against Napoleon and shared it on social media.

On Sunday, a St Petersburg court ruled that Irina Volkova, a 31-year-old model who had posted a photo on Instagram in which her bare buttocks are exposed in front of St Isaac’s Cathedral , would not be held in pre-trial detention. She is facing criminal charges for “insulting religious feelings”. The cathedral is run as a museum, although services are held there including, on 1 October, the first Romanov wedding since the Bolshevik Revolution.

The law on offending religious feelings was passed with the support of the Russian Orthodox Church after Pussy Riot’s “punk prayer” at Moscow Christ the Saviour Cathedral in 2012.

On 29 October, a Moscow court sentenced Ruslan Bobiyev, a blogger from Tajikistan known for his Internet pranks, and his girlfriend Anastasia Chistova to ten months in a penal colony for breaking the same law after they posted a photo of Chistova in a police uniform simulating oral sex on him in front of St Basil’s Cathedral on Red Square.