You are here: Home » Articles filed under: 'News' » Article: 'State of the science of taxonomy'

State of the science of taxonomy 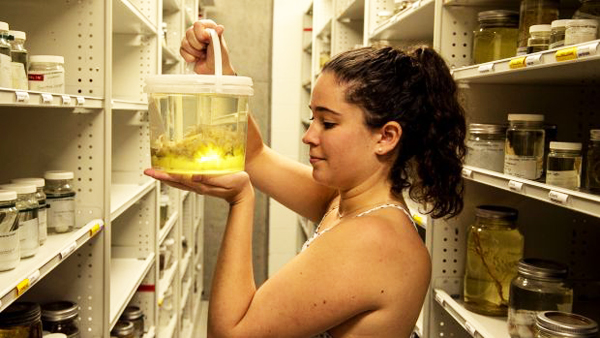 Claire Rowe, a marine biologist at the Australian Museum, is researching the spread of upside-down jellyfish in NSW waters.  Photo: Steven Siewert.

Claire Rowe sees herself as one of the lucky science graduates among her cohort as she gets to research the upside-down jellyfish now spreading along Australia’s east coast.

Visitors to coastal lakes such as Lake Wallis and Lake Illawarra might share in her good fortune too if her work at the Australian Museum improves understanding of the Cassiopea jellyfish and how they might be controlled.

The jellyfish, which hails from more tropical climes such as Taiwan, attach themselves to the seabed. Swimming over them, especially with flippers, can trigger the release of invisible stinging cells. These can cause extreme itchiness, and stepping on them can sting too.

“I’ve wanted to be a marine biologist since I first snorkelled at age six,” said Ms Rowe, now 23, as she wound her way through the museum’s warren of storage rooms that hold 18.4 million natural history specimens alone.

“A lot of my friends that I graduated with are struggling to find science jobs without pursuing postgrad studies, so I am very lucky to have my position at the museum.”

While the jobs refrain might be a common one among newly minted scientists, it seems particularly true of specialists in taxonomy. That’s the field of classification, or as Cameron Slayter, manager of the museum’s Life Sciences, puts it, “the science of species discovery”.

That’s a trend at odds with many other nations, and particularly difficult for a science requiring close study of a single taxa and so, is unsuited to switching fields, he said.

The latest study – released without fanfare late last year by the Turnbull government – found numbers of taxonomists in Australia have remained in the few hundreds since the 1970s even as the population doubled.

Significantly, more than a quarter of the taxonomic workforce in 2016 “identified as being retired/honorary/volunteer positions”, compared with 19 per cent in 1975, the report said.

Mr Slayter said the museum had several senior fellows retire in the past year or so – but only nominally.

Not only are fewer people “doing taxonomy as their core business now than in previous years”, the report also found a large proportion of fieldwork was also “unfunded, and carried out by unpaid/honorary researchers”.

Mr Slayter said federal funding of about $2.5 million a year to support taxonomy was “absurdly small” and basically unchanged “since the ABRS was set up by Gough Whitlam”.

Josh Frydenberg, the federal environment and energy minister, said Australia was “recognised internationally as a leader in taxonomy”, with the government providing more than $2 million annually to researchers through the National Taxonomy Research Grant Programme.

“This grant programme has a strong focus on supporting early career researchers, in an active attempt to renew the workforce,” he said.

However, Adam Bandt, the Greens science spokesperson, said science and research were “under attack in this country”.

“Instead of relying on the unpaid work of taxonomists, we should be providing the sector with the funding it needs to conduct vital research on the natural world,” Mr Bandt said.

“Taxonomists are overworked and underpaid, and it’s not going to be solved by a government which thinks so little of science that it’s not represented in the ministry,” he said, referring to the dropping of a minister for science by the Turnbull government.