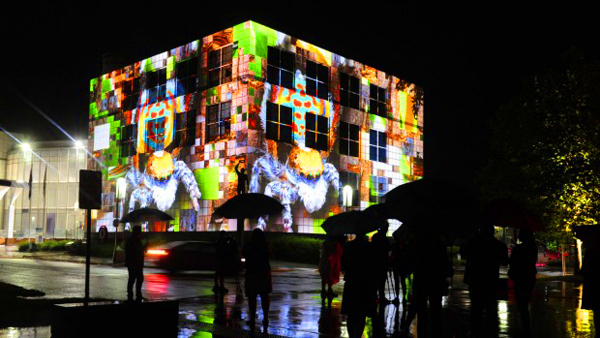 Questacon lights up during Enlighten 2016. The National Science and Technology Centre was won of the winners at the Canberra Region Tourism Awards on Friday night. Photo: Melissa Adams.

It is the place thousands of children from all over the country go every year to learn, through interactive games and educational shows, about science and technology.

And on Friday, at the ACT tourism industry’s night of nights, Questacon was among the winners celebrated by almost 350 industry figures at the glittering Canberra Region Tourism Awards overlooking the city at the National Arboretum.

The National Science and Technology Centre took out the Tourist Attraction award for 2016, while organisers of the outstanding Encounters exhibition at the National Museum of Australia went home with the Major Festivals and Events award,

“This is a pivotal point for Canberra’s major attractions and key businesses of the region as the city further engages broader international audiences and in doing so, heightens our reputation for tourism excellence on the international stage,” he said.

Among the other winners were the 2016 National Folk Festival, for festivals and events, Jamala Wildlife Lodge, for “unique accommodation”; Canberra Airport for “specialised tourism services” and the Canberra Institute of Technology for tourism education and training.

Professor Graham Durant AM, was recognised for his outstanding contribution to the industry, while Kate Landford at Questacon won the Markus Gibson-Huck Young Achiever Award, and Leon Yogaraj received a commendation for his work at Doma Hotels.

One of the biggest winners on the night was the Royal Australian Mint, which took out the gongs for cultural tourism, tourism visitor education and the visitor experience award.

Chief Minister Andrew Barr congratulated all this year’s entrants, whom he described as continuing to “strive for excellence and innovation”.

“A growing tourism sector is essential to the visitor economy, helping to reach our target to grow overnight tourism expenditure in the ACT to $2.5 billion by 2020,” he said.

A new award for “international-ready” tourism ventures was also given out on the night, a sign of a maturing industry as international flights in and out of the capital grow.

The Australian Sports Commission’s “Experience AIS” took out the award for its first-class offering and marketing of events and experiences at the Australian Institute of Sport’s Bruce campus.

Positions Vacant » View All
» Senior Curator of Art – MAGNT
» Director, First Nations – MAAS
Latest News » View All
AWM ‘young and free’ branding adapts
+ a Greek perspective on national anthem Read more.
What’s the word of the year for 2020?
in US art museum world it’s ‘deaccession’ Read more.
12 major international controversies of 2020
- & why they won’t disappear in 2021 Read more.
Victorian Collections online launched
- supported by MV & AMAG Vic Read more.
Univ of Melb & MV Tas tiger collaboration
findings only possible through museum loans Read more.
Top +
Council of Australasian Museum Directors, c/o Ms Daryl Karp, Museum of Australian Democracy at Old Parliament House PO Box 3934 Manuka, Australian Capital Territory 2603 Australia, © CAMD 2021
Copyright: All information and resources provided on this website remain the copyright of the Council of Australasian Museum Directors. Permission is granted for viewing and downloading for personal and not for profit purposes. Those wishing to reproduce any materials for commercial, educational or other uses are requested to contact us.
Disclaimer: The content of this website is provided for information purposes only and is not intended as a substitute for professional advice. No claim is made as to the accuracy or authenticity of the content of the website. The Council of Australasian Museum Directors does not accept any liability to any person for the information or advice (or the use of such information or advice) which is provided on this website. The information on our website is provided on the basis that all persons accessing the site undertake responsibility for assessing the relevance and accuracy of its content. No responsibility is taken for any information or services which may appear on any linked web sites. Hostgator.
.