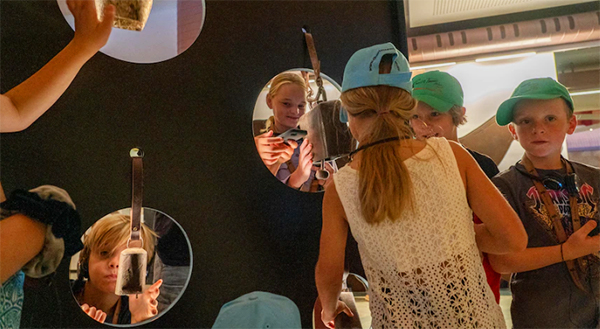 Interactive museums are better than ones where you “just look at history and stuff” says Will, 9. (ABC Western Queensland: Ellie Grounds).

It’s not often an activity would equally entertain a nine-year-old boy and a 100-year-old grandmother, but the interactive experience at the new-look Australian Stockman’s Hall of Fame in Longreach has hit that multi-generational sweet spot.

The outback Queensland museum reopened on Thursday after a $15 million makeover three years in the making.

Gladstone residents Mandy and Huub De Bruijn extended their stay in Longreach for the reopening.

“I thought we’d be finished within two hours. We’re two hours in and we’re not even halfway through.”

The museum has been transformed from old-fashioned static displays to an interactive, choose-your-own-adventure-style experience using headsets and smart devices.

“It’s been completely transformed from what you would expect a traditional museum to be, into what the museums of today should be. 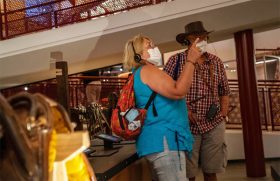 Mandy and Huub De Bruijn extended their holiday in Longreach to wait for the Hall of Fame to reopen.(ABC Western Queensland: Ellie Grounds).

‘No kid wants to go to a museum’ … until now

For kids visiting the Hall of Fame, the lure of a treasure hunt is too exciting to pass up.

Led by an interactive, digital kelpie on their headset, children are tasked with a search-and-find mission around the museum. 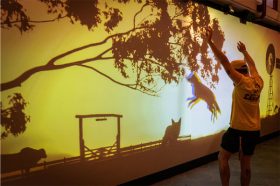 “[We went on a] big treasure hunt and found all the little treasures to find. [At] other museums, you just explore and look at history and stuff.”

Mr Mills said enticing more families to the Hall of Fame was a big priority.

“We’ve never had children stay in the museum for longer than 10 or 15 minutes, [in] that age group [of] seven through 12 in particular.”

The investment has paid off.

“I think an hour and a half they were in there, having a play,” Mr Mills said.

“It’s not a theme park, but [Thursday] morning, you wouldn’t have known the difference.”

One-hundred-year-old Amy Crosbie and her son Paul were meant to travel to outback Queensland last year so Ms Crosbie could fulfil a long-held dream to see the Hall of Fame.

COVID-19 ruined that plan, but Ms Crosbie said it was a blessing in disguise.

“I am so impressed. There’s so much thought gone into this,” she said. 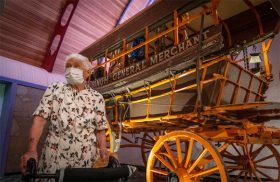 Victorian Amy Crosbie, 100, says she has wanted to visit the Stockman’s Hall of Fame for a very long time.(ABC Western Queensland: Ellie Grounds).

Ms Crosbie was impressed with the stories of rural Australians celebrated in the museum.

“My families all came out here in 1854 and they all took up land in Victoria, so I am actually a country girl at heart.

“I was brought up with kelpies many years ago.”

CEO Lloyd Mills says the museum’s transformation from old to new is “like night and day”.(ABC Western Queensland: Ellie Grounds).

Mr Mills said the stories told in the exhibits had come from a history collection curated over decades, biographies donated by the families of stockmen and women, and even handwritten notes. 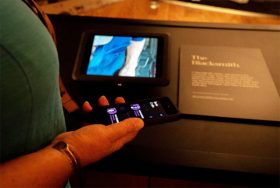 Hall of Fame visitors are given an interactive device with stories about influential Australian stockmen and women.(ABC Western Queensland: Ellie Grounds).

Indigenous Australians and female stock workers, whose vital roles in rural Australian life were often overlooked, have also taken up their rightful place in the displays.

For Mandy and Huub De Bruijn, altering their holiday plans was worth it.