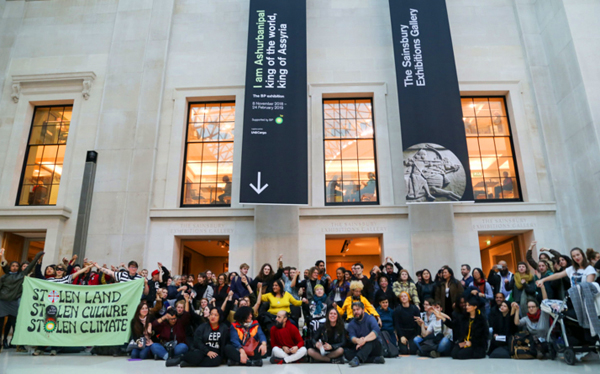 Activists and supporters outside of the BP-sponsored exhibition, Ashurbanipal: King of Assyria, King of the World (all photos by and courtesy of Diana More).

Performance troupe BP or Not BP? organized a “Stolen Goods Tour” at the British Museum, where activists of Australian Aboriginal, Iraqi, Hawaiian, Māori, and Greek Cypriot heritage called for the repatriation of looted artifacts in the museum’s collection.

LONDON — On Saturday, December 8, activists from around the world led a tour of the British Museum, during which they called for the museum to return cultural objects acquired through colonialism, and to end sponsorship from the oil company BP. The unofficial “Stolen Goods Tour,” which was organized by the protest theatre group BP Or Not BP? , featured talks by activists of Australian Aboriginal, Iraqi, Hawaiian, Māori, and Greek Cypriot heritage, and was attended by around 150 people.

The tour began in the museum’s “Enlightenment Room” with a talk by Australian Aboriginal activist, Rodney Kelly, who has been campaigning for the return of the Gwaegal shield for the last two years. Kelly is a sixth-generation descendant of the warrior Cooman and says that the shield was seized from his ancestor in 1770 by Captain James Cook during the first encounter between the British and Indigenous Australians at Botany Bay.

In his talk, which was interspersed with performances on the yidaki, Kelly explained that the restitution of the shield would be a way of acknowledging the historic violence enacted against Aboriginal people. He also explained the object’s spiritual importance: “It may just be a piece of wood for some people,” Kelly said, “but Aboriginal people are spiritual people; the Earth is our Mother.”

In August 2016, the Australian Parliament passed a motion supporting Indigenous Gweagal ownership of the shield and calling for its restitution. In 2016, the British Museum loaned the shield to the National Museum of Australia in Canberra for an exhibition called Encounters: Revealing stories of Aboriginal and Torres Strait Islander objects from the British Museum. Kelly’s family complained of their “disgust” at the Museum’s decision to loan — rather than return — the shield to Australia.

The British Museum is currently bound by an Act of Parliament from 1963, which prohibits the deaccessioning of items in its collection, except in very limited circumstances. The only exceptions to this rule are artifacts containing human remains and cultural objects looted from Jewish families during WW2. Kelly said that he had not made a formal request for the shield because he knew that the museum’s trustees were bound by this parliamentary act.

The next stop on the Stolen Goods Tour was the exhibition Ashurbanipal: King of Assyria, King of the World, which is sponsored by BP. Following a performance-demonstration at the press opening of the exhibition, Shahla, a campaigner of Iraqi descent voiced her anger at the fact that cultural objects from the area which is now Iraq are being used to promote BP, which supported the 2003 invasion of Iraq. She said: “For BP to now sponsor an exhibition of stolen art from modern-day Iraq reeks of moral bankruptcy, and an audacious attempt to whitewash their complicity in war and destruction.”

Following this, the tour moved to the museum’s “Living and Dying” room, to hear from the Interisland Collective, a group of Pacific Islander artists and cultural workers. Ahilapalapa Rands, an artist of Hawaiian descent, read a blessing to the Moai head Hoa Hakananai’asent by the Rapanui people of Easter Island, who are calling for the Moai’s return.

Ariana Davis, a speaker of Māori descent, called on the British Museum to return the 2,300 Māori taonga (varying cultural heirlooms or artifacts) held by the museum, which it acquired during colonial times. She said: “As an Indigenous person, it hurts to know that there are 2,300 taonga locked away, especially when you view these taonga as living objects containing the life force of your ancestors.”

The tour then moved to the Parthenon Marbles, where Danny Chivers — a member of BP or not BP? who is of Greek Cypriot heritage — spoke about the removal of the marbles by Lord Elgin in the early nineteenth century and called for their return. The Greek government continues to demand the repatriation of the Marbles, for which there are specially constructed display cases in the Parthenon Museum in Athens.

The British Museum is a public space where people can come to debate and we respect other people’s right to express their views. We allow peaceful protest onsite at the Museum as long as there is no risk to the Museum’s collection, staff or visitors.

The British Museum exists to present a history of the world from 2 million years ago to the present day, it is a unique resource for the world. The strength of the collection is its breadth and depth, allowing an understanding of the cultures of the world and how they interconnect – whether through trade, conflict, migration or conquest. The British Museum is always open to consider how objects can be shared around the world and is one of the world’s leading lenders across the globe. For example, the bark shield currently serves as an ambassador for indigenous Australian culture here in the UK, 6 million visitors are able to see the shield for free each year.

The long-term support provided by BP allows the Museum to plan its programming in advance and to bring world cultures to a global audience through hugely popular exhibitions and their associated public programmes. Over 4 million people have enjoyed an activity at the Museum supported by BP.