You are here: Home » Articles filed under: 'News' » Article: 'Stonehenge tunnel – a positive legacy or'

Stonehenge tunnel – a positive legacy or

August 6th, 2021 | Browse other: News. | Tagged with: Stonehenge could be placed on Heritage in Danger list if the tunnel goes ahead, Stonehenge ruling prompts debate among heritage community | 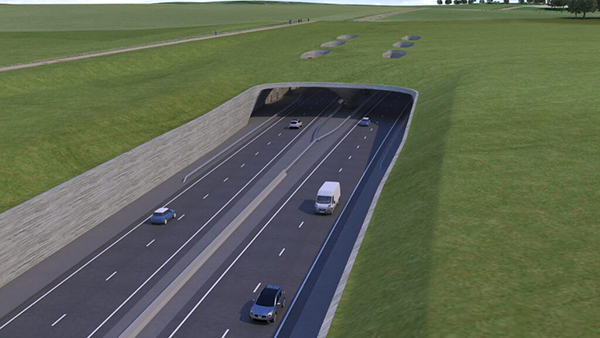 The proposed tunnel would have continued for two miles under the prehistoric site Highways England.

Opinion divided on next steps after high court quashes planning permission for tunnel.

A high court ruling that quashed planning permission for a two-mile road tunnel through the Stonehenge World Heritage Site has divided opinion in the heritage community.

The 30 July judgment found that transport minister Grant Schapps’ decision to give the £1.7bn road project the green light had been unlawful.

The judge agreed that, in breach of planning rules, Schapps had not properly assessed the risk of harm to each heritage asset within the World Heritage Site, and did not have the evidence to conclude that the project would cause “less than substantial harm” to the heritage assets. The judge also concluded that the transport secretary had made an error of law by failing to consider alternatives to the scheme, such as a longer tunnel.

Days before the ruling, Unesco warned that the neolithic site Stonehenge could be placed on its Heritage in Danger list if the tunnel went ahead“considering it carefully before deciding how to proceed”.

The National Trust and Historic England, both of which backed the proposed tunnel, also expressed their disappointment in the decision.

A spokesman for Historic England said: “This is a missed opportunity to remove the intrusive sight and sound of traffic past the iconic monument and to reunite the remarkable Stonehenge landscape, which has been severed in two by the busy A303 trunk road for decades.

“We believe that the scheme had the potential to deliver a lasting positive legacy for the World Heritage Site and we advised on a rigorous programme of archaeological investigation to ensure the impact on sensitive archaeological remains was minimised.”

A National Trust spokeswoman said: “The National Trust has been calling for decades for a solution to the problems caused by the A303 as it passes Stonehenge. The existing road blights the landscape, damages the setting and sightlines between burial mounds and monuments, and restricts access to the southern two-thirds of the World Heritage Site.

“We continue to believe in the benefits of a tunnel scheme to reunite the Stonehenge landscape. We note the decision in the high court, which relates to the process of how the secretary of state made his decision to consent the scheme, not the merits of the scheme itself. We await the government’s response to the court’s decision.”

The Stonehenge ruling, which follows Liverpool’s loss of world heritage status last month, has reignited a debate in the sector on the tension between development and heritage.

There was support for the court’s decision among many heritage professionals. Dan Hicks, professor of contemporary archaeology at Oxford University, welcomed the judgment, saying the “white elephant” road project would have “set a very dangerous global precedent for large-scale construction projects within Unesco World Heritage Sites”.

Historian Tom Holland, who was involved in the campaign, said the judgment was “wonderful news”. 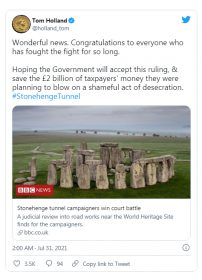 But in a letter to the Times, archaeologist Mike Pitts, author of Digging Up Britain, said the court’s decision raised difficult questions about the future of the site.

“The problem remains however: how do we resolve conflicts between daily lives and valued heritage?” he wrote. “Legally and culturally we agree it is right to excavate – to understand and enjoy at the cost of some destruction – a royal Anglo Saxon tomb or Viking mass grave so that roadworks can proceed.

“Nothing of such significance is likely to survive in contested areas at Stonehenge, where hyperbole has greatly outpaced reality (world heritage status describes a site’s qualities, it does not create them).

“Our concerns now must be that inaction will allow present failures to continue – traffic jams, accidents and rat-running down country lanes, a blight on public enjoyment of Stonehenge and a divided landscape – and that any actions will be worse than the rejected scheme, as well as potentially more damaging.”

The government has yet to announce whether it will appeal the decision.