You are here: Home » Articles filed under: 'News' » Article: 'Strange, open and innovative'

Chloe Hodge, The museum of the future is strange, open, and innovative, Apollo, 11 August 2016 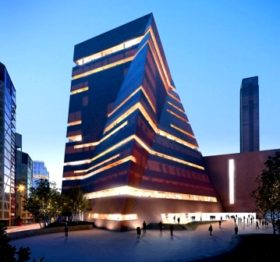 What is a museum? Google tells us it is ‘a building in which objects of historical, scientific, artistic, or cultural interest are stored and exhibited’. However, speaking at this month’s Communicating the Museum conference in Berlin (12–15 July), former Tate Modern director Chris Dercon defines the museum as a ‘robust form of strangeness and openness’. This is embodied by the new Tate Modern Switch House: an armoured guardian of strangeness and openness rising above the South Bank with its right shoulder to the financial centre, the City of London, and its left turned to the Houses of Parliament.

Protecting these values is increasingly seen as essential in the museums sector today, especially in the context of an increasingly nationalist and culturally segregated world. Cultural integration – over tolerance – is key, and among those championing this during the conference were representatives of a conglomerate of museums in Berlin with the scheme ‘Multaqa: Museum as Meeting Point’. For this project, 25 Iraqi and Syrian refugees – renamed ‘newcomers’ by director of communications at the Deutsches Historiches Museum Barbara Wolf – have been trained to give tours of Berlin’s leading museums to Arabic-speaking refugees, providing free entertainment, an escape from poor living conditions and opening up discussion about European and Middle Eastern cultural history. The guides were archaeologists, artists, architects, lawyers, musicians, and economists in their home countries, and as a young guide from Baghdad explained in Berlin, ‘The museums in my city have been destroyed; we hope that one day we in Baghdad can offer the same [cultural conversations] to Europeans.’

As European museums look to the Middle East, in Australia museums have begun to ask: ‘Are we China-ready?’ This term was coined in response to the one million Chinese visitors that arrived in the country in 2015, and the Aussie jargon refers to a desire to welcome Chinese visitors with their own cultural etiquette, cuisine and bi-lingual material. The idea is primarily market-driven, but may soon influence museum curators, as the assistant director at Sydney’s National Maritime Museum, Deanna Varga, mentions when discussing her institution’s upcoming programmes: ‘We’re hoping to bring over a Chinese junk ship – well, that’s a personal endeavour.’