You are here: Home » Articles filed under: 'News' » Article: 'Strengthening the Museum and Art Gallery of the Northern Territory'

Strengthening the Museum and Art Gallery of the Northern Territory

The following news has been received from the office of the Northern Territory Minister for Arts and Museums.

NEW LEGISLATION TO STRENGTHEN OUR MUSEUMS

The Board of the Museum and Art Gallery of the Northern Territory (MAGNT) will have new powers to help it attract private sector support under new legislation that was passed in Parliament today.

“This new legislation will ensure as many people as possible can enjoy our museums,” Mr Conlan said.

“Allowing the MAGNT to become a Statutory Authority will allow it to attract more philanthropic donations and corporate sponsorship that will further enhance its exhibitions and programs through the acquisition of major art works or scientific material and items of significance to the Territory’s cultural heritage.

“These increased powers will mean MAGNT can provide a better experience for Territorians now and into the future.

“More than 200,000 visit MAGNT each year, but with improved programs and exhibitions that number will be able to grow even more.

“The Country Liberals Government understands the important role our unique museums and art galleries play in attracting tourists to the Territory. This new legislation will also allow us to showcase our arts better to tourists and build a more prosperous Territory economy.”

Pierre Arpin, Director of MAGNT, said he was thrilled to see the Bill passed today.

“This is a vote of confidence for our institution,” Mr Arpin said.

“The Act will provide the MAGNT with an operating model which is generally recognised as the best governance model for cultural and collecting institutions. This new structure will also allow the MAGNT to work more closely with the business and philanthropic communities – to grow our collections and better support our programs.”

Under the legislation, the MAGNT collection, which includes art works, specimens, exhibits, equipment, data and publications, will continue to be owned by the Territory.

All current MAGNT staff will remain as public sector employees under the new legislation. 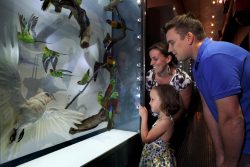 Visitors at MAGNT. Source: MAGNT
Positions Vacant » View All
» Exhib & Creative Services Officer – Otago Museum
» Curator (Pacific) – TMAG
Latest News » View All
OM’s Ian Griffin names asteroid 53109 for
Martinphillipps Dunedin's Chills frontman Read more.
7 Pillars of Audience-focus – change from
product, to marketing, to audience-focus Read more.
A New Approach’s vision for arts & culture
- technocratic neoliberalism? Read more.
We can fund the arts in better ways
- a Smart Fund managing a levy partnership? Read more.
MA UK report on Redundancies –
after one year of Covid Read more.
Top +
Council of Australasian Museum Directors, c/o Ms Daryl Karp, Museum of Australian Democracy at Old Parliament House PO Box 3934 Manuka, Australian Capital Territory 2603 Australia, © CAMD 2021
Copyright: All information and resources provided on this website remain the copyright of the Council of Australasian Museum Directors. Permission is granted for viewing and downloading for personal and not for profit purposes. Those wishing to reproduce any materials for commercial, educational or other uses are requested to contact us.
Disclaimer: The content of this website is provided for information purposes only and is not intended as a substitute for professional advice. No claim is made as to the accuracy or authenticity of the content of the website. The Council of Australasian Museum Directors does not accept any liability to any person for the information or advice (or the use of such information or advice) which is provided on this website. The information on our website is provided on the basis that all persons accessing the site undertake responsibility for assessing the relevance and accuracy of its content. No responsibility is taken for any information or services which may appear on any linked web sites. Hostgator.
.