Kim Goodwin, Post budget, we need strong cultural leaders more than ever, The Conversation, 14 May 2015 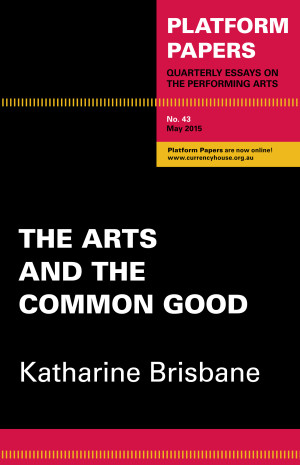 Platform Paper The Arts and the Common Good.

Cultural leadership has been under the spotlight in recent times. Or maybe “under the microscope” is a better turn of phrase – as you’d be forgiven for not seeing it clearly from a distance.

Most of the action is coming from the performing arts sector, with theatre historian Katharine Brisbane arguing we need cultural leaders as much as we need obsessive artists in the recently released Platform Paper The Arts and the Common Good.

This followed calls from directors Ralph Myers and Wesley Enoch for renewed exuberance in the realm of arts leadership.

Both expressed concern that our artistic leaders are being subsumed by those with a business approach. Cultural leaders need to be risk takers, they all argue – and maybe those in the sector are just a little too comfortable.

Comfort is likely not widely felt in the arts sector so soon after the release of the 2015 Budget.

While ABC and SBS employees may be relieved, the rest of the sector is coming to terms with further cuts to Screen Australia and the Australia Council – and the creation of the new A$104.8 million National Centre for Excellence in the Arts.

While operational details are still to come, it looks like this new player on the cultural landscape will bring the role of the federal Arts ministry front and centre into decisions of funding allocation, a direct challenge to the “arms length” model that has operated for nearly half a century.

Writing on ArtsHub on budget night, Ben Eltham suggested the impact will likely be felt mostly in the small to medium sector, the place we grow most of our future leaders. For potential leaders who consider speaking out and challenging the status quo, such as those who threatened to boycott the Sydney Biennale in 2014, the economic consequences may be dire.

The reluctance to discuss leadership, or indeed stand up and be counted as a leader, in the Australian cultural industries is a common theme encountered in my research.