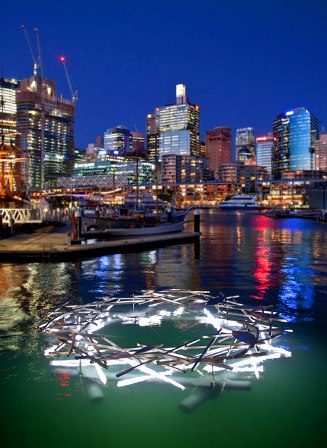 On 14 September 2015 a major art installation by leading Australian light artist Warren Langley was unveiled at the Australian National Maritime Museum to commemorate the disappearance of submarine HMAS AE1 and the loss of its 35 souls, 101 years on.

The work entitled ‘… the ocean bed their tomb’ takes the form of a large scale stainless steel wreath, six metres in diameter floating above the water in the museum basin, casting a shadow from day to night. Warren Langley states:

This is an art work about contemplation and reflection in both a literal and metaphorical sense … In sunlight, the polished stainless steel structure shimmers and reflects its image upon the water surface. At night a concealed light source creates a complex optical intrigue of reflections.

The concept for the work of art arose from the mysterious circumstances of the submarine’s disappearance, the necessarily truncated effort to search for it given the exigencies of wartime operations and the chimera or elusive shadow it leaves, in that neither the submarine nor the bodies of the men on board have been found. Commander Lieutenant Besant, his two officers and 32 Australian and British petty-officers, seamen, artificers and stokers remain lost at sea.

When the submarine failed to return to Rabaul Harbour on 14 September 1914 fellow ships of the Australian Naval and Military Expeditionary Force including HMAS Parramatta, Yarra, Encounter and Warrego were deployed searching for three days. No traces were found and the ships resumed their hunt for German cruisers in the Pacific.

The loss and this unresolved mystery, amplified by a line from a poem (‘… the ocean bed their tomb’) written at the time by South Australian Anne Almer, inspired Warren Langley to conceive the work in a lyrical homage to the lost sailors.