Auckland Museum – already recognised for green initiatives – is extending its programme for energy efficiency by installing a solar panel system on its roof by January 2014, thanks to a partnership with Meridian Energy.

The amount of renewable energy generated by the solar panels will be equivalent to the power consumed by around nine average households.

The solar installation is being made possible with the support of Meridian, which has shared its expertise, having worked with the museum on the design and scope of the project.

Museum staff are reviewing concept designs from potential suppliers for the system.  Expected to generate in the order of 77,000 kWh per annum, it will be one of the largest grid-connected photovoltaic (PV) installations in the country.

The panels will be located on the eastern and western side of the museum roof and will not exceed the roof parapet height, in order to ensure the museum operates within the strict sightline and other rules which maintain the heritage character of the building.

The system will be connected to the national electricity grid, however all the energy generated from the sun’s rays will be used onsite, reducing the museum’s electricity bill and its carbon emissions footprint.

In June Auckland Museum received one of NZ’s top environmental awards for its hefty greenhouse gas emission reductions over recent years.  The Ministry for the Environment’s 2013 Green Ribbon Award for greenhouse gas emission reductions went to the museum for cutting its carbon footprint by 31% over the past two years, producing savings of $340,000 this year.  In 2011 Auckland Museum became the first museum in the world to gain certification for its carbon emissions under the independent CEMARS® scheme (Certified Emissions Measurement And Reduction Scheme).

Carbon emissions savings were largely achieved through improvements in air conditioning control strategies and systems, which cut consumption of natural gas and electricity. Other contributors were increased recycling by the public and staff, improved power-saving by staff and more use of energy efficient LED lighting.  In 2013 the museum aims to cut emissions by at least a further 5.7%, by sending less waste to landfill, reducing travel and achieving more gas and electricity savings.

Auckland Museum Director Roy Clare describes the generation of solar energy as a further milestone in the museum’s environmental sustainability programme and an important contribution to the global green agenda for change.

“We have already been recognised for saving dollars and carbon. Generating electricity onsite through solar energy is an obvious next step that aligns with one of our guiding principles: kaitiakitanga. Improved guardianship produces savings that help us provide excellent value for money by offsetting the costs of programmes that better serve our diverse audiences.

“Environmental practices are changing and more is required of all city buildings. Aucklanders and the tourists who visit the museum expect us to play a leadership role showing the benefits from a cleaner environment and supporting a thriving tourism sector.”

Mr Clare said the museum was fortunate to have Meridian Energy confirmed as a major partner for the solar project.

“This is really exciting for us and Auckland Museum. We’re committed to supporting our customers to achieve their goals, and this is a great example of the power of long term customer relationships,” says Alan.

“The choice of solar as an energy-saving technology is being harnessed more and more, and we will continue to investigate and learn more about its place in the New Zealand electricity market.”

Auckland Mayor Len Brown has welcomed the museum’s latest environmental initiative, saying:  “Increasing the uptake of renewable energy is an important environmental goal on the path towards making Auckland the world’s most liveable city. I appreciate the initiative being shown by Auckland Museum and hope their lead will inspire other organisations in Auckland.” 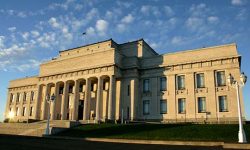 Auckland War Memorial Museum. Source: AWMM
Positions Vacant » View All
» Collection Manager (Vertebrate Zoology) – TMAG
» Senior Manager Physical Infrastructure – AM
Latest News » View All
MAPDA 2021 winners –
Best in Shows to AG of Ballarat & NFSA Read more.
AMAGA elects Council for 2021-23
- Seb Chan new President Read more.
How artists use QMN
mammal and bird collections Read more.
National Trust of SA Ayers House”eviction”
History Trust of SA proposed as new tenant Read more.
QM & Eromanga NHM on Australia’s largest
dinosaur – more on Australotitan cooperensis Read more.
Top +
Council of Australasian Museum Directors, c/o Ms Daryl Karp, Museum of Australian Democracy at Old Parliament House PO Box 3934 Manuka, Australian Capital Territory 2603 Australia, © CAMD 2021
Copyright: All information and resources provided on this website remain the copyright of the Council of Australasian Museum Directors. Permission is granted for viewing and downloading for personal and not for profit purposes. Those wishing to reproduce any materials for commercial, educational or other uses are requested to contact us.
Disclaimer: The content of this website is provided for information purposes only and is not intended as a substitute for professional advice. No claim is made as to the accuracy or authenticity of the content of the website. The Council of Australasian Museum Directors does not accept any liability to any person for the information or advice (or the use of such information or advice) which is provided on this website. The information on our website is provided on the basis that all persons accessing the site undertake responsibility for assessing the relevance and accuracy of its content. No responsibility is taken for any information or services which may appear on any linked web sites. Hostgator.
.