February 25th, 2022 | Browse other: News. | Tagged with: 'Delightful' bird paintings by Susan Lester to be celebrated in the book that nearly never was, Tasmanian Museum and Art Gallery | 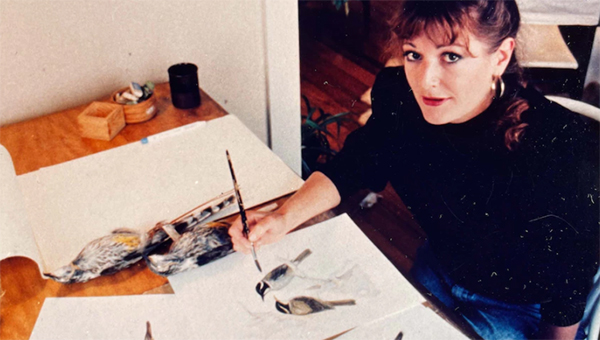 Georgie Burgess, ‘Delightful’ bird paintings by Susan Lester to be celebrated in the book that nearly never was, ABC Radio Hobart, 21 February 2022

When media magnate Edmund Rouse was embroiled in a political scandal and jailed for attempted bribery in 1989, it sent his businesses into turmoil.

One lesser-known victim of Rouse’s demise was budding artist Susan Lester, who was commissioned by the businessman to paint 200 detailed Tasmanian birds to be published as a special two-volume book to mark 150 years of The Examiner Newspaper.

It was a huge task, one that would take four years of Lester’s life, and would launch her career from an emerging self-taught hobby painter to a professional artist.

“It was an extraordinary opportunity for an artist because it was basically a 200-work commission and full-time employment for four years,” her sister Libby Lester said.

“She was banking everything on this book.”

It was spruiked by Rouse’s media company ENT as “one of the most extensive illustrated works of Tasmanian birds ever published”.

A short time after Lester delivered the paintings to Rouse, the 1989 state election occurred and the incumbent Liberal government led by Robin Gray lost its majority.

The Greens held the balance of power, and Rouse offered Labor MP Jim Cox $110,000 to cross the floor and support Gray instead of Labor’s Michael Field, who would create an accord with the Greens.

Among his vast local, national and international business interests Rouse was the chairman of Gunns, a Tasmanian logging company that did not want to see Greens MPs wield any power in the state.

Mr Cox reported the bribery attempt to police, and Rouse was arrested and jailed.

“Sue heard no more about the book and gave up trying to track it down,” Professor Lester said. 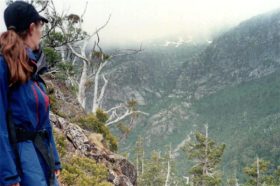 Lester spent a lot of time in the Tasmanian wilderness.(Supplied: Greg Smith)

“She’d lost the momentum of becoming a professional artist and the paintings had disappeared.” 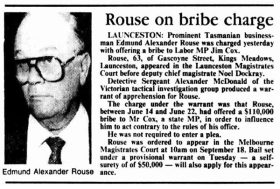 Susan Lester returned to radiography, a profession she had trained in, and painting again became a private hobby.

It remained an important pastime to her, even in the weeks before her death last month.

The Royal Hobart Hospital radiographer was just two weeks away from retirement when she lost a battle with a short and intense illness.

Her family are determined to finally get her paintings published as a book to share with the public, with the help of the Tasmanian Museum and Art Gallery and donations through a crowdfunding website.

While 199 of the works have been found, one painting remains missing — the swift parrot. 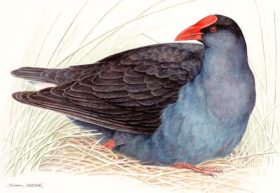 The purple swamphen was one of the 200 birds Lester painted.(Supplied: Tasmanian Museum and Art Gallery) 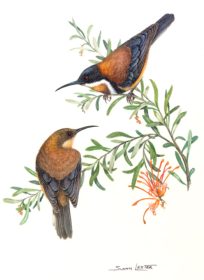 The passionate nature lover’s work was known for its scientific accuracy.

“Mum had a scientific mind and she also had an artistic mind, and that’s very rare in a person,” her son Ben Ritchie said.

“I think those two sides of her internally fought with each other a little bit.

“She was very emotionally invested in the art, and it took her total concentration to do it.”

Libby Lester, an academic at the University of Tasmania, said her sister taught herself how to paint and draw.

Her art started to get serious when she was in her 20s and working in a souvenir shop in Devonport.

“She had plenty of time on her hands and started painting birds to sell in the shop,” Professor Lester said.

“Initially they sold like hotcakes, she couldn’t keep up with demand.”

Lester went on to have several exhibitions, and as her reputation grew she was approached to paint for a series of cards.

It was then that she came to the attention of Rouse. 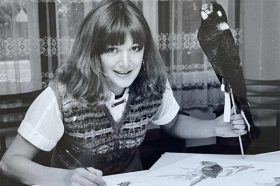 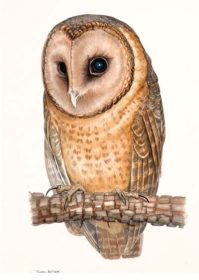 Ben Ritchie says during his childhood there were times when owls lived in the house. (Supplied: Tasmanian Museum and Art Gallery)

‘A freezer full of dead birds’

Lester was paid a basic wage from Rouse for the project and put all other art and work on hold.

“It just never paid the bills, she had a child to support, and she was a single parent on and off,” Mr Ritchie said.

“She was told she’d get royalties for the book.”

She took the commission extremely seriously, spending a lot of time in the bush studying birds and working with naturalist from the Queen Victoria Museum and Art Gallery Bob Green.

“My childhood was always full of freezers of dead birds and birds on sticks,” Mr Ritchie said.

“I remember particularly during a time she was painting owls, we had live owls in our house.

“I was in grade 1, and I’d come home and all the curtains would be drawn, and you’d see some big gold eyes looking at you from up on the curtain rails and they’d peer around at you.”

With many connections at museums and the Parks and Wildlife Service, injured or taxidermy birds would be lent to her. 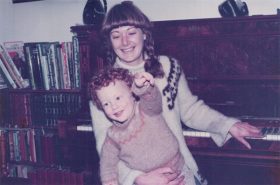 Mr Ritchie said his mother failed to get the paintings back from Rouse’s company ENT.

“She felt a huge sense of loss when they disappeared and the book didn’t appear,” he said.

“As a working and professional artist, she wanted to be compensated for that art.”

She still painted, but it was never to be a professional pursuit again.

“She was so upset … she rarely talked about it and she’d lost a lot of confidence about that part of her life.” 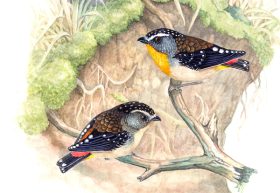 About the year 2000, an accountant at a commercial television station in Hobart, formerly owned by Rouse, found the paintings in the bottom of a safe.

“The accountant recognised they were something of value but had no idea what they were, where they’d come from or why they were gathering dust in this old studio,” Professor Lester said.

The Tasmanian Museum and Art Gallery (TMAG) was approached about the paintings, and they were eventually identified and donated by ENT.

“She was lost and at a loss about what to do with the series of events, including when the paintings re-emerged,” Professor Lester said.

“By that stage Sue had lost the confidence to use the paintings to kickstart her career again.”

TMAG exhibited about 40 of the works and has held them since — though they have not been displayed.

“Sue and I talked about how I could help to get them published. Sue felt she wasn’t wanting to face the risk of being let down again,” she said.

Her lack of confidence in her art following the Rouse affair was not characteristic of the brave bushwoman. 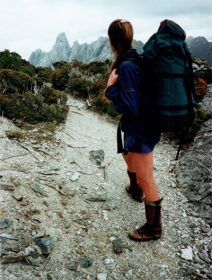 She and her partner Greg Smith built a house in the bush at Tods Corner in Tasmania’s central highlands.

She continued to paint birds and went on adventurous bushwalks.

“Sue very famously managed to have an aneurism climbing Federation Peak and walked back basically into emergency brain surgery,” she said.

“She was so competent and so brave in so many things, that’s why this fear of being let down was unusual.”

Her family are raising money through an online crowdfunding website to publish the paintings.

“We see it as a beautiful collection of Tasmania’s endemic birds plus something to commemorate Sue,” she said.

“I think she would have been cautiously delighted and a little bit anxious,” Professor Lester said.

Painting still played a big part in Sue’s life, even in her final weeks.

“She kept asking for Greg to get her painting stuff back from the lakes,” she said.

“She wanted to paint with her granddaughters.”

Tasmanian Museum and Art Gallery principal curator of art Jane Stewart said the museum was pleased to support the project.

“We are happy to support her family and friends in publishing them so that more Tasmanians can enjoy these delightful works,”  Ms Stewart said.