The state’s galleries and museums have pitched for greater funding from NSW Treasury and privately warned the cumulative effect of year-on-year cuts is stripping them of vital resources.

The additional funding bids have been made ahead of the NSW budget to be handed down on June 8, with the state government flagging multimillion-dollar cuts for the Art Gallery of NSW, the Australian Museum, the Museum of Applied Arts and Sciences, and Sydney Living Museums in budget forecasts. 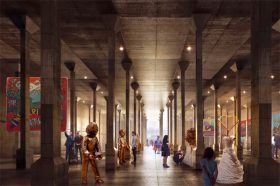 An artist’s impression shows what the new Oil Tank Gallery could look like at Sydney Modern. Credit: Art Gallery of NSW and SANAA Sydney Modern.

Struggling to recover from the impacts of COVID-19, they have also called attention to the impact of annual efficiency dividends that apply to all government departments in order to generate budget savings.

The annual dividend charge was extended by the NSW Treasurer from 2 to 3 per cent in 2018-19 for a period of four years targeting back-office savings. Institutions said this had affected their ability to absorb economic shocks such as COVID-19, and research, plan exhibitions and audience outreach.

Budget forecasts, reported by this masthead, show that Sydney’s major culture institutions could be hit hard by further cuts to their operation funding which would affect the quality of art, exhibitions, staff, and performances inside galleries and museums.

NSW Treasury proposes cutting $9 million annually from the Art Gallery of NSW’s budget from June, as it prepares to open the doors to Sydney Modern, its new home for contemporary art currently under construction.

The Australian Museum would take an even deeper cut of $13 million just months after opening its $57 million renovated galleries while the Museum of Applied Arts and Sciences would have to find savings of almost $10 million annually.

A spokesperson for Minister for Arts Don Harwin said the NSW government had provided record funding to the arts sector, including cultural institutions in recent years. The spokesperson said they would continue to receive the necessary financial support to ensure they could operate effectively. 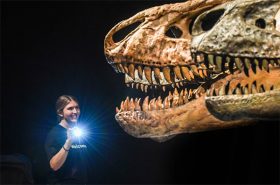 The Public Service Association, which represents staff at those the institutions in line for cuts, said its members were worried there already were not enough skilled people to deliver exhibitions, particularly in Sydney Modern.

The union said it remained concerned about the growing reliance on temporary and casual staff among these institutions, a factor that added to employment uncertainty in the broader arts sector. Many members had been classed as temporary workers despite working for four years or more, it said.

“NSW has just invested a huge amount of money in overdue upgrades to these cultural institutions, but now the building works are over the government is cutting them off at the knees, making it impossible to deliver on the potential of these new spaces.”

At an upper house inquiry the union estimated 41 per cent of employees at the Museum of Applied Arts and Sciences were casuals, 22.7 percent at the Art Gallery of NSW and one in five at the Australian Museum.