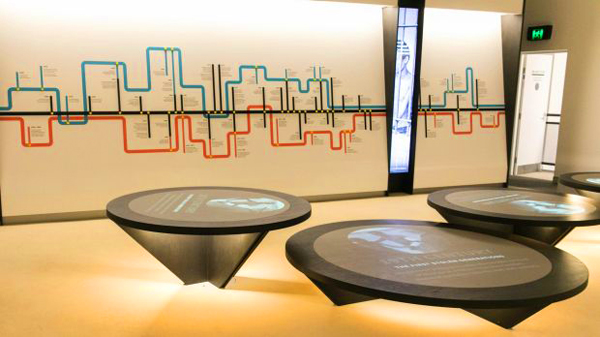 It is a little known fact that in the aftermath of the terror of Kristallnacht an elder of the Yorta Yorta nation led a delegation on behalf of the Australian Aborigines’ League to the German consulate in Melbourne to protest the “cruel persecution of Jews” in Germany.

William Cooper was not admitted and his protest attracted little attention except for a small single column report in The Argus in Melbourne.

The new Holocaust and Human Rights exhibition completes the museum’s refurbishment and looks at issues of disability, refugee, Indigenous and LGBTQI rights in Australia.

The space contains a series of tables focusing on human rights achievements and challenges while a timeline notes major human rights developments and violations. Two multimedia displays show the evolution of international human rights laws and continuing instances of genocide and mass atrocities from the beginning of the 20th century to the present day.

While the timeline notes the Rohingya crisis, the partition of India, the Howard government’s 2001 Pacific Solution in which asylum seekers are processed offshore and Kevin Rudd’s apology to the Stolen Generation, it makes no mention of the ongoing Palestinian-Israeli conflict.

Project director Avril Alba said the issue was complex for the museum and the Jewish community and a decision was taken to address it through education and public programs.

“We do realise it’s a complex issue that has to be faced,” she said. “That was the decision we took but one thing about this exhibition is that we do feel it’s going to grow and change and if that is something that is then better served by being integrated into the exhibition, then we may well.”

Dr Alba conceded the museum could be criticised for its omission but “if the criticism means we will develop and change that aspect, then that is what will happen”.

The idea behind the exhibition space is to give contemporary relevance to the experience of the Holocaust, especially as Australian Holocaust survivors age and die.

Dr Alba said: “The impetus is to bring out the contemporary resonance and relevance of this event and to begin to look at not only how it impacted the post-war world, that would be too simplistic, but to see – in a sense – how it’s enduring messages inform issues today, particularly in Australia.

“When people met the survivors it was not a stretch for them to then extrapolate that to something very present and immediate because that is their experience.

“We know we can’t ever replicate that, and we aren’t trying to replicate that, but what we do want is to give this history a sense of aliveness and a sense that there is something about it that speaks to today.”

The museum’s chief executive, Norman Seligman, said he hoped the exhibition would encourage the concept of personal responsibility and the need for individuals to stand up and voice their concerns.

Cooper’s protest was considered extraordinary for the time. “It was one of the few protests that we know about internationally but it was undertaken when his rights in this country were so severely curtailed and yet he still found it within himself to lead a delegation protesting against the event of Kristallnacht,” Dr Alba said.

The final part of the exhibition permits visitors to answer the question: What do human rights mean to you? In this section, differing opinions can be aired around the Palestinian-Israeli conflict, Dr Alba said.