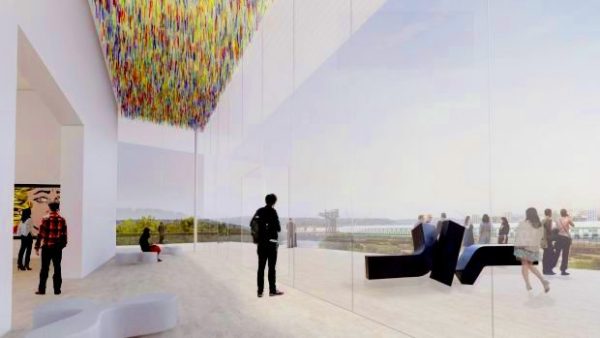 Interstate rivalry is alive and well among the nation’s state art galleries. The best and busiest is in Melbourne, where the National Gallery of Victoria is quietly moving ahead with plans for a third site for contemporary art. Queensland Art Gallery’s contemporary venue, the Gallery of Modern Art, opened on the banks of the Brisbane River a decade ago.

Tasmania has its modern-art magnet, too, the Museum of Old and New Art built by millionaire gambler David Walsh.

It can make Sydney look a poor relation. The Art Gallery of NSW occupies one of the best sites in the city: the Domain parklands on one side, harbour views on the other. But every space of the gallery is used, cramping its style for blockbuster shows and even restricting the number of school visits. Sydney, the argument goes, should have a destination art museum, a visual arts complement to the Opera House.

Last year the gallery revealed plans for a bold new extension, an adjoining building to be called Sydney Modern: an architectural landmark designed by one of the world’s hottest firms, SANAA. The building would double the gallery’s size, with spaces for indigenous art, large-scale exhibitions, a restaurant and function centre. The projected cost is $450 million.

If all goes to plan, Sydney Modern will open in 2021 for the AGNSW’s 150th anniversary. But that seems a long way off, as the gallery still does not have the cash or approval to proceed.

It aims to raise $100m in donations — for the right price, it will put a benefactor’s name over the front door — but so far has not identified a single donor in support of the project.

The NSW government — with $600m to spend on cultural infrastructure — has given $15m for development work, but nothing more in the recent state budget. Funding for SANAA’s initial engagement ended last month, with no sign of Sydney Modern moving into construction phase anytime soon.