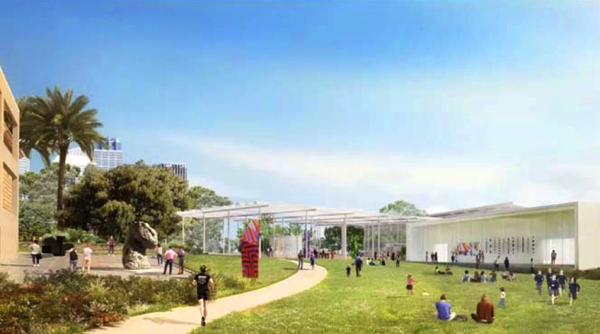 The NSW Planning Minister, Anthony Roberts, will determine determine whether to approve the Sydney Modern expansion of the Art Gallery of NSW, despite the lodging of more than more than 200 objections to the project.

Opponents of the project, who argue it represents an unwarranted appropriation of public land at the Domain, have been pushing for its approval to be determined by an independent panel.

But the Department of Planning and Environment says an independent process is not necessary, due to the extensive consultation already undertaken for the $344 million scheme.

“This is a secretive government,” said lawyer and former chairman of the Environmental Defenders Office, Bruce Donald.

“Major projects require full public access to the detailed case with decisions being made by transparent and independent processes, not by ministers behind closed doors,” said Mr Donald.

Those concerned about the scheme cite the fact that the Arts Minister, Don Harwin, has already seemed to endorse the expansion as evidence that governmental approval could be a box-ticking exercise.

The National Trust, for instance, has referenced the “deep controversy” associated with the gallery’s expansion as a reason that it should be determined by the Independent Planning Commission.

Of the 282 submissions made on the development application for the scheme, 202 were opposed while 70 were in support. The most common criticisms were the loss of open space in the Domain, followed by the design of the new structures.

The National Trust argued the new structures would be “unnecessarily large” in contrast to the existing gallery.

Major projects with more than 25 objectors are typically determined by the Independent Planning Commission or its predecessor the Planning Assessment Commission, usually following a public hearing.

But because the Art Gallery of NSW is a public entity, the Planning Minister is the consent authority. A spokesman for the Department of Planning said that, because of the consultation that has already occurred, it was “not considered necessary for the minister to make a specific exception to the established decision-making arrangements in this instance.”

Jeff Angel of the Total Environment Centre wrote to Mr Roberts that concern about the proposal warranted a public process.

“In an effort to ensure the objectivity and credibility of the final decision, an independent authority is the only way to ensure public confidence in the DA decision process,” Mr Angel wrote.

A group including Mr Donald, architect David Chesterman, and two former trustees of the Royal Botanic Garden and Domain Trust, Gillian Appleton and Ros Andrews, was due to meet with the Gallery’s director Michael Brand, and Art Gallery Trust president David Gonski on Tuesday.

The Gallery has said it has made some changes to the design of the project following the submissions. These changes include using different external building materials that complement the existing gallery, more use of rooftop gardens, and increased planting of “compensatory” trees.

Through a spokeswoman, Mr Brand said consultation was a “very important” aspect of the gallery’s expansion.

“We always like to hear all views about the Gallery and our expansion,” Mr Brand said.

The government has said it expects construction to take place between 2019 and 2021, which would be the 150th anniversary of the establishment of the existing gallery. The government expects the expansion to double the gallery’s visitor numbers.