You are here: Home » Articles filed under: 'News' » Article: 'Sydney museums shake off the cobwebs'

Sydney museums shake off the cobwebs 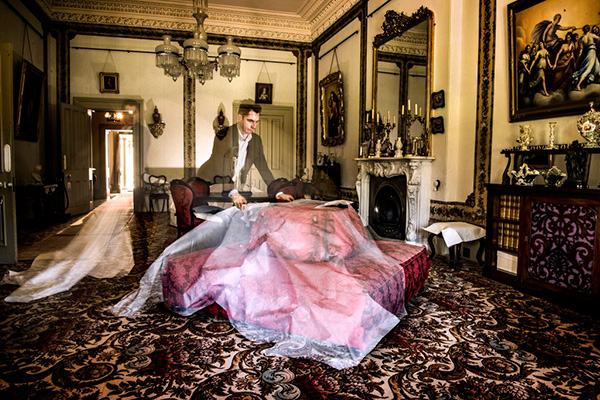 Adam Lindsay, executive director of Sydney Living Museums uncovering furniture which has been protected from dust and sunlight in the drawing room of Vaucluse House. Credit: Steven Siewert.

Linda Morris, Museums shake off the cobwebs as they prepare to welcome visitors, The Sydney Morning Herald, 8 October 2021

The longest winter for the state’s museums and galleries is coming to an end.

Curtains were drawn on the city’s cultural institutions for an initial two-week lockdown on June 26 that dragged out to three months. But from Monday, the covers will be pulled off exhibitions, new and those that were cut short, with interiors gleaming from spring-cleaning and renovations that took place during the emptiness of lockdown.

At the Powerhouse Museum in Ultimo, five new exhibitions will be unveiled to the public, the three-month period of darkness also serving as an opportunity to clean large objects on permanent display.

Conservation staff used microfibre brush mops to remove dust from the wings and fuselage of the Catalina Flying Bird, Cirrus Moth, Beechcraft, Bleriot XI and the Scout Mark I suspended from the roof of the Boiler Hall. 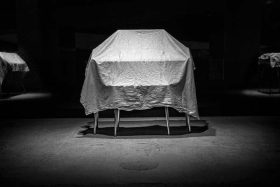 Keyboards, part of the Electric Keys exhibition, were covered and protected from dust and sunlight in the Powerhouse Museum during lockdown. Credit: Steven Siewert.

Staff gained access to the top of the aircraft bodies and wings using a knuckle lift with a jointed boom arm that manouevred horizontally and vertically and rotated 360 degrees. The museum also completed an annual inspection of cables.

Chief executive Lisa Havilah was alone at her desk many days, as the Powerhouse hibernated.

“A museum without its public, gave the spaces of the museum a new context, almost like a seat waiting for someone to fill it,” she said.

“The Powerhouse conservators, registrars, curators and workshop and production teams have created exhibitions – that will see new objects come into the collection through commissions, gifts and acquisitions alongside Powerhouse collection objects that have never been seen before – telling new stories for a Powerhouse museum that is in the midst of being re-imagined. We are beyond excited to be welcoming everyone back.” 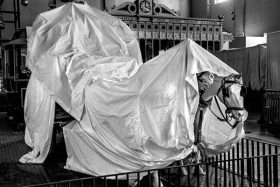 A horse-drawn omnibus will soon be back on display at the Powerhouse Museum. Credit: Steven Siewert.

The Boulton and Watt steam engine, built during the Industrial Revolution, will be put through its paces to ensure it is running smoothly. The Strasburg Clock, turned off during the lockdown, will be restarted by the Powerhouse’s senior conservator so visitors see the correct time.

Lockdown has been also useful for the curators and conservators of Sydney’s historic homes. Rose Seidler House has been rewired and repainted, the furniture moved back on Thursday. Stocktakes of furnishings and other items have taken place at Vaucluse House and Elizabeth Bay House. 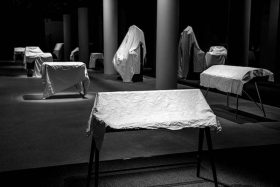 If the 2020 lockdown is anything to go by, curators believe they’ll be inundated with bookings for a busy and social summer. They will need to be if the major cultural institutions are to claw back revenue lost to the pandemic-led shutdown.

Revenue from venue hire for Sydney Living Museum’s historic homes and gardens suffered a 26 per cent decline after Sydney went into lockdown. Since plans have been announced for the reopening of NSW in October, new venue inquiries increased more than fourfold, suggesting public confidence is high.

In the last two weeks alone venue hire revenue increased six per cent, many bookings for weddings or milestone anniversaries made with short lead times. 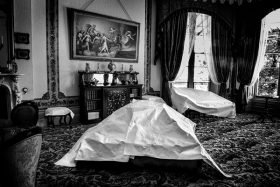 The soft furnishings of Vaucluse House’s drawing room with their cotton silk damasks were covered to prevent staining and dust accumulating in the fabric. She was especially careful to monitor the insect specimen cabinets on loan from the Chau Chak Wing Museum. 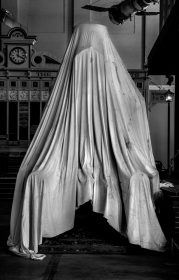 Fortunately, Flyte says it’s been a cold and relatively dry winter. Had lockdown occurred in hot and humid February, care of the early 19th-century domestic household collections might have been a greater challenge.

At the Australian Museum, the covers have been pulled off Unsettled, a new perspective on the nation’s story of foundation disrupted by the lockdown. More than 21,000 visitors saw the exhibition during its opening months. Its public run will be extended until after Australia Day. 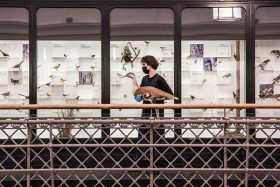 Rehan Scharenguivel puts birds back on display at Australian Museum ahead of its reopening on Monday. Credit: Steven Siewert.

“Museums are good for the soul and for our city,” chief executive Kim McKay says.

While in lockdown, some of the museum’s taxidermied birds underwent low-oxygen and low-temperature pest treatment as a preventive measure against carpet beetle infestations.

Specimens of a bar-tailed godwit, sooty tern, Australian bustard, and wandering albatross were returned to their perches in the Bird Gallery on Thursday. 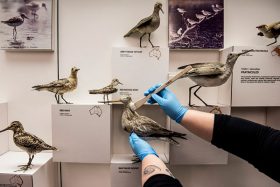 Sophie Phillips puts birds back on display with a little dusting at the Australian Museum. Credit: Steven Siewert.

The museum reinstated heritage windows providing visitors with a close-up, behind-the-scenes view of the inner workings of its lab, where conservators help care for some of the 21.9 million objects and specimens from its collection.