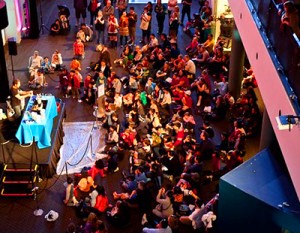 Save the date for the inaugural Sydney Science Festival 2015! Led by the Museum of Applied Arts and Sciences, this city-wide festival will provide serious science fun for adults, families, school groups, for young and old and in-between, for geeks, non-geeks, for everyone with curiosity.

There will be talks by researchers, hands-on workshops, opportunities to chat with scientists, children’s activities and panel discussions where you can have your say alongside celebrity science speakers. The full program will be available on 7 July. Check back in soon!

The full program will be available soon. Subscribe for updates here

Expressions of interest to be part of the program are now open. If you have an idea for an event, talk, workshop, tour or exhibition, we want to know about it.  You might already be planning an event as part of National Science Week … submit your idea to be part of Sydney Science Festival too!  If you hadn’t thought about it, now’s the time.

Submit your expression of interest here

This Inspiring Australia initiative is supported by the Australian Government as part of National Science Week.